On December 31, 1862, Daniel Freeman made his way to the land office in Brownville, Nebraska. It was just before midnight, but Freeman, a Civil War soldier on furlough, arranged for an obliging clerk to open the doors. He planned to file the first homestead claim under the newly enacted Homestead Act which took effect on January 1, 1863.

At 12:05 A.M., Freeman successfully filed his claim. He was awarded a tract of land in Nebraska that he lived on and cultivated until his death in 1908. Later, to celebrate the most progressive land redistribution in American history, Freeman’s property became the Homestead National Monument of America. 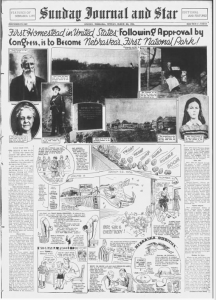 The Homestead Act was US legislation that granted 160 acres of unappropriated public land to any American citizen or immigrant who declared his intention to become a citizen, upon the receipt of a small fee. Applicants agreed to live on the land, improve it, and build a residence. Those applying were required to be 21-years-old or the head of a family. Women and freed slaves were also eligible to apply.

Enacting homestead laws did not come easy. Southern states regularly voted against homestead legislation, fearing it would create an agricultural alternative to the slave labor system. Others argued the legislation was inevitable. When the Homestead Act finally passed, it opened up the Great Plains and western United States to settlement.

Mary Myer and her husband Philipp were German immigrants to the United States. In 1860, they made their way to the Nebraska frontier and settled on a piece of land, planning to remain there until owners forced them to leave. Philipp died in 1861, and when the Homestead Act passed in 1862, Mary realized she could apply to own the land she and her three children already lived on. On January 20, 1863, Mary filled out application number 20 and received homestead rights, possibly becoming the first woman to own land under the Homestead Act.

Six months after legislators approved the Homestead Act, the Pacific Railroad Act passed. By May 1869, the transcontinental railroad provided easy transportation and lured homesteaders further West. As more homestead land became available, eager settlers snatched it up. By 1934, the government processed more than 1.6 million homestead applications and awarded 270 million acres of land to citizens. In 1988, 125 years after the first homestead claim, Kenneth Deardorff received the last grant of land under the Homestead Act for 80 acres in Alaska.

Did someone in your family file a homestead claim? Is the land still in your family? Learn more about the Homestead Act on our topic page and research your family’s homestead roots on Newspapers.com.