The first time the now-recognizable bright white letters stood on the hills over Hollywood, they were little more than a fancy advertisement. “Hollywoodland,” the 1923 sign spelled, and in its shadows stood the new residential development of the same name. 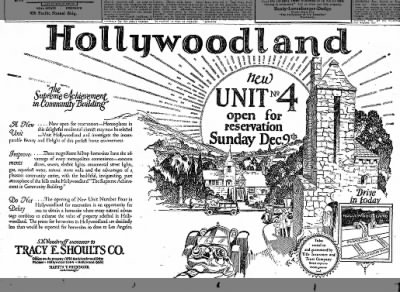 The sign was only intended to last for a year and a half, but the 30-foot letters were soon a symbol recognized internationally thanks to the up-and-coming industry of American film. So the sign was left alone. 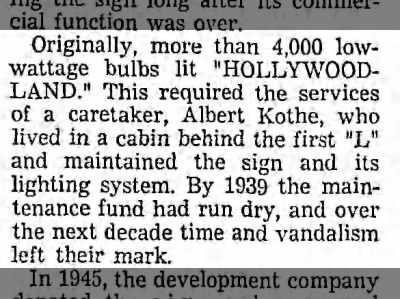 Since it was never meant to last forever, it didn’t take long before upkeep faltered, deterioration set in, and the sign began to look pretty sketchy. In 1949, restoration efforts were made with the stipulation that “land” be removed from the sign so it could better represent the district as a whole rather than just the development for which it was originally created. 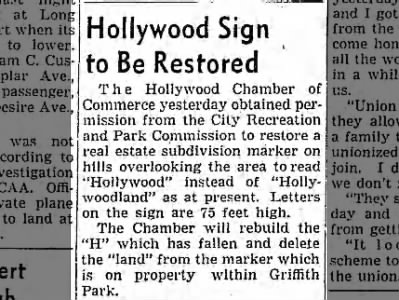 But time erodes all things, and in less than 30 years the sign looked worse than ever. That’s when the stars stepped in. At nearly 28k a pop, the nine letters were restored thanks to the donations of celebrities like Gene Autry and Hugh Hefner, who each “sponsored” a letter. The replacement letters were bigger, stronger, steel and concrete structures built to last. They were unveiled in 1978 and, other than a thorough repainting in 2005, still remain as sturdy and scenic as they were on that day. 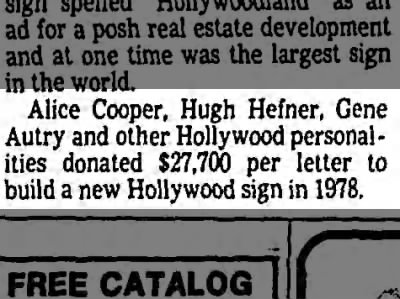 Find more on the history of these iconic letters in the pages of Newspapers.com. Try a search here, or browse papers here at your leisure. Be sure to check out the recently added Los Angeles Times collection for more articles from Californian history.