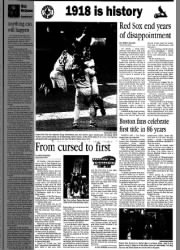 October is playoff season in baseball, culminating in the World Series at the end of the month. In its 110-year history, World Series teams have had their share of making headline news.

The first World Series championship was held in 1903. The Boston Americans beat the Pittsburgh Pirates, winning five games in the best-of-nine series at Huntington Avenue Baseball Grounds in Boston. A few things have changed since then, including a name change to the Boston Red Sox, a different stadium—Boston’s beloved Fenway Park—and of course, a shorter best-of-seven series. The Cincinnati Enquirer reported the victory which brought “great rejoicing in the City of Culture.”

A banner proclaiming “National pastime no more until end of world war” and “Boston Red Sox are un-crowned kings of 1918 season” tops a page in The Indianapolis News filled with headlines, game stats, and opinions about that year’s World Series. It would be Boston’s last 20th-century world championship. However, declaring “1918 is history” in 2004, The Hays Daily News in Kansas devoted an entire page to the history-making win with additional headlines of “Red Sox end years of disappointment,” “From cursed to first,” and “Boston fans celebrate first title in 86 years.”

The Great War was over in 1918 so the game resumed despite the previous year’s announcement. In 1919, the Chicago Daily Tribune sponsored an electric scoreboard on the front of the Colonnade building so fans outside the park could keep up with the action. In far-away San Bernardino County, California, fans could listen to the games and watch the electric board at the Opera House. 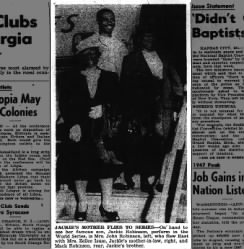 Those who remember their baseball history know that the 1919 World Series was marred by scandal. It was another best-of-nine series, this time between the Chicago White Sox and the Cincinnati Reds. Known as the Black Sox Scandal, some members of the White Sox team plotted with gamblers to lose the series. The Tribune published the “Inside Story of Plot to Buy World’s Series” in their September 25, 1920, edition.

Jackie Robinson broke the baseball color barrier in 1947, playing for the Brooklyn Dodgers, a team that also made it to the World Series that year. Jackie’s mother flew East to watch him play. The Dodgers lost to the Yankees in seven games—their 11th World Series win.

In over a century of World Series history, there are a lot of highs and lows reflected in the headlines of home-team papers and in the sports pages of newspapers around the country. Catch up on the latest in historical headlines on Newspapers.com.