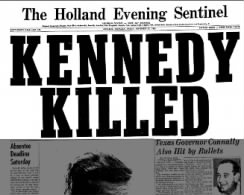 Where were you fifty years ago this month when you first heard news of the assassination of President Kennedy? Many people learned of the Dallas shooting almost immediately via radio or television, or as news spread quickly by word of mouth. Newspapers rushed to press and we gripped each page in disbelief as stunning reports were printed. Newspapers published on that fateful day and the days that followed remind us now of how the nation reacted and mourned.

Today, half a century later, we can read those same newspapers, beginning with headline news of the assassination on November 22, 1963, and following with related events for days and weeks beyond. Through historic newspapers, we recall the grief that settled upon our nation and spread to the world.

Most afternoon editions carried major headlines in tall, bold letters on that tragic Friday, rivaling few historic headlines of the past. Entire front pages were devoted to the news and associated stories. As deadlines loomed, newspapers quickly pushed other stories aside to publish any news they could find room for in order to satisfy their readers. A photo of protests in Houston the previous day with “no incidents” remained on the first page of The Charleston Daily Mail next to breaking news of the assassination. 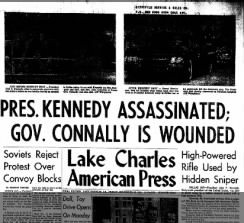 Some papers, like The Daily Messenger in Canandaigua, NY, and The Ludington Daily News in Michigan broke custom and printed bold headlines above their newspapers’ titles. Others, like the Lake Charles American-Press in Louisiana, completely rearranged its traditional front-page layout to fit in headlines and photos. Some headlines were short, yet filled half a page, while others were comprehensive. Some used abbreviations to bring all the details into one header, yet may have been too hasty by overlooking a spelling error.

Of course, it was the news stories accompanying the headlines that transfixed the nation and the world. These events need no retelling here. Read the newspapers of the day! Facts emerged quickly, succeeding events continued to dominate the headlines, and for days afterward it seemed as if the world’s news revolved around America’s grief.

The photos printed then remain in our memories today. On the day following the assassination, many newspapers carried the photo of a grim Lyndon Johnson as he was sworn in aboard the presidential plane, the young widow, Jacqueline Kennedy, by his side, her face registering shock and sadness. 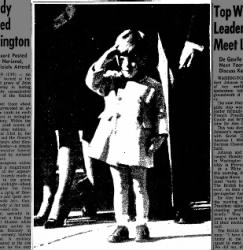 On the following Monday, images of the Kennedy’s funeral shared the page with the famous photo of Ruby shooting Oswald. However, the most poignant photo of that day was of John Kennedy, Jr., known as John-John, as he saluted his father’s casket. It was John’s third birthday. His sister, Caroline turned six, two days later.

Place the exact date—22 November 1963—into advanced search on Newspapers.com within the specific date field, then choose Search to find additional headlines. In the calendar on the left of the search results page, click on each date in succession to reveal the front pages of newspapers as they progress through the events that followed. The thumbnail images provide a microcosm of historic headlines surrounding the JFK assassination.