Historical Headline August 1910: Motion Pictures Are Made to Talk 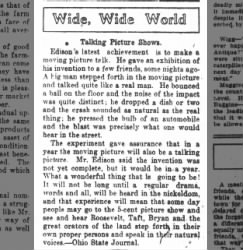 On August 27, 1910, the New York Times reported that Thomas A. Edison exhibited his new kinetoscope to a small audience in West Orange, New Jersey. It was reported as the first demonstration of his moving picture invention synchronized with sound.

The article noted that a man entered the frame of the film and as his lips moved the sound of his voice issued from the concealed phonograph. The illusion was reported to be “perfect” and Edison’s “plans for the future of his kinetoscope are boundless.”

Edison boasted that he would not be satisfied creating simple moving and talking picture shows, but wanted “to give grand opera” to people in “far stranded towns.” The next day, another Times reporter opined that the new invention would never “supplant opera and drama in its natural form,” but might increase demand “by cultivating the taste of the multitude.” Looking back now, over a hundred years later, the success of that point is debatable!

The Indiana Democrat mentioned Edison’s talking picture demonstration with a scant one-sentence report a few days later. The Springfield Missouri Republican marveled that the man in Edison’s film “dropped a dish or two and the crash sounded as natural as the real thing” and that the “experiment gave assurance that in a year the moving picture will also be a talking picture.” News reached across the pond to London where The Times reported that it “will soon be ready for general use.” 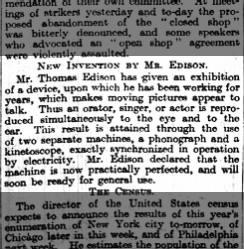 Talking pictures produced by Hollywood were still many years in the making, despite Edison’s hope for a speedier launch. When The Jazz Singer debuted in 1927, it revolutionized the film industry and notoriously upset things in the 1952 musical Singing in the Rain. In that fictional account, a man demonstrated talking pictures by getting quite close to the camera to say, “Notice, it is a picture of me and I am talking. Note how my lips and the sound issuing from them are synchronized together in perfect unison.” We can imagine it may have been similar to Edison’s 1910 demonstration.

Headline news of the past brings a fresh perspective to many things we take for granted today. Catch up on many more historic events by immersing yourself in the headlines and stories on Newspapers.com.