Highlights from Tournament of Roses History 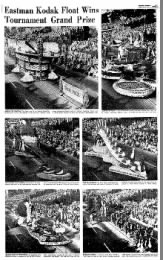 The Tournament of Roses, with its Rose Parade of beautifully decorated floral floats and subsequent Rose Bowl football game, draws hundreds of thousands of viewers in person and millions more via live broadcast every year. And for many families, it’s tradition to attend—or watch on TV—this annual New Year’s event. Did you know that on Newspapers.com, you can find all sorts of articles and images from Tournament of Roses history?

The Tournament of Roses, which celebrated its 125th anniversary earlier this month (2015), was first held in Pasadena, California, on New Year’s Day in 1890. It was organized by the Valley Hunt Club as a way to showcase the warm California weather and the gorgeous flowers it produced even in the middle of winter. That first year, members of the club decorated their carriages and buggies with flowers and organized a tournament of sports—including footraces, horse races, jousting, and more—for an audience of more than 2,000. 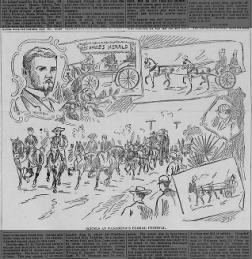 Though from the very beginning the parade centered on vehicles decorated with flowers, motorized floats weren’t included until 1901, and they didn’t become ubiquitous until 1920. The tournament aspect of the event also changed over the years. In the early days, the tournament included races of all sorts‐foot, bicycle, horse, pony, donkey, ostrich, and even one race between a camel and an elephant. Beginning in 1904, the tournament also featured chariot races, though they were eventually discontinued in 1915 because they were deemed too dangerous. 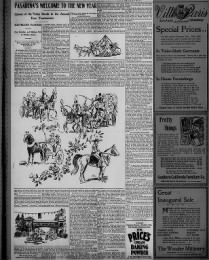 Over the years, however, the tournament sports gave way to a focus on college football, which today is a key part of the Tournament of Roses. A football game was first included in 1902 and drew a crowd of 8,500. After that first game, football was discontinued in the Tournament of Roses until 1916, but since then it has been played annually in the Rose Bowl. Though traditionally held in the Rose Bowl Stadium, built in 1922, the customary “East vs. West” football game was played in Durham, North Carolina, in 1942 because of fears of a Japanese attack on the West Coast; the parade itself was canceled for the duration of the war.

Are you a fan of the Rose Parade or Rose Bowl? Find many more articles about their history on Newspapers.com!

3 thoughts on “Highlights from Tournament of Roses History”