One thing that has changed very little throughout the years is a person’s need to look and feel the best they can. Ads have capitalized on human insecurity for as long as they’ve been around, using promises and deception–and occasionally even the truth–to get people to buy their products. Here are just a few examples of interesting or unusual newspaper ads and tips that you might not see so much these days. 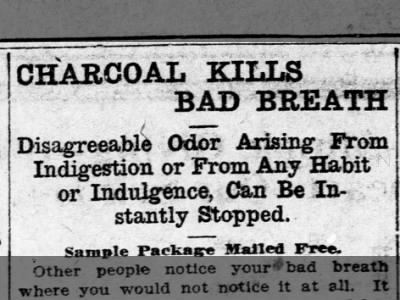 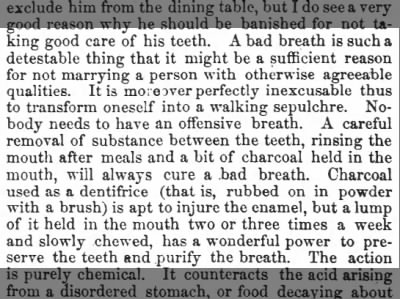 The charcoal ads introduce one of the few weird remedies that actually work. Charcoal as a rudimentary breath mint? Yes, in the absence of anything better to brush away that horrific halitosis, it will do the job. You’ll just want to rinse your mouth or else show the world your grimy black grin.

Most of the old ads indicate that the charcoal was sold in the form of capsules or lozenges, which certainly makes the idea seem more palatable. But it wasn’t many years ago that sucking on a lump of charcoal was a valid option for removing that unappealing bad breath. 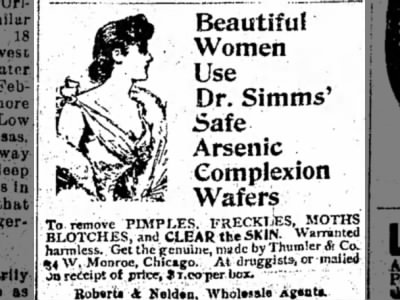 Some ideas were less lasting. These “complexion wafers” were possibly quite effective, but the added benefits of arsenic did not outweigh the negative side effects–like being poisoned, for example. Arsenic wafers were certainly not as safe as Dr. Simms would have us believe. 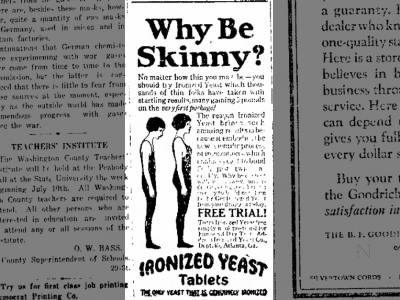 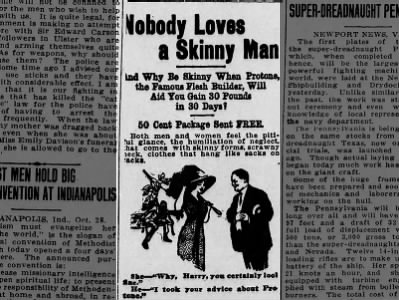 The first quarter of the twentieth century saw numerous ads on gaining weight, a concept that might seem strange to many now. Pills and powders were touted with assurances of serious weight gain. They were most often directed toward women with flat, narrow physiques, implying that they would get more looks and more success with fuller figures. “Skinny” men received the same treatment in reverse; women would surely pay attention to them if they gained thirty or forty pounds! These ads have practically disappeared in favor of those promoting weight loss in the years since. 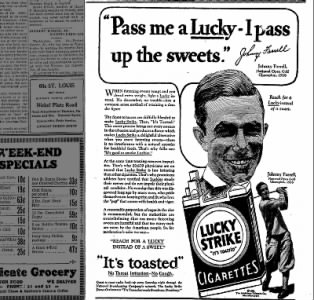 The old cigarette ads probably wouldn’t surprise anyone. Cigarettes companies posted ads with endorsements from doctors, promises of throat-soothing properties, and, like the ad above, implications that smoking would help you stay away from those tempting sweets.  That last one may be a true assertion, but cigarettes are not exactly a healthier alternative. 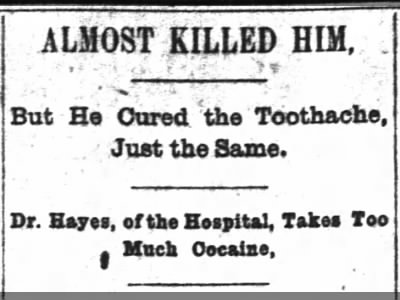 Cocaine was a once an acceptable remedy for toothaches, usually in the form of drops to suck on. The article above tells a story of a doctor who tried a more direct method, injecting cocaine straight into his gums. The headline makes it pretty clear how well that turned out. But he did cure the toothache! 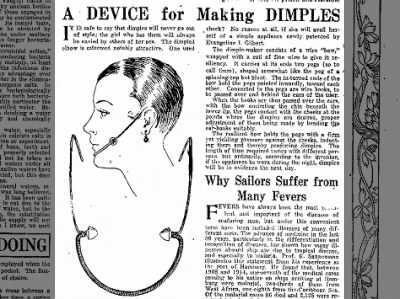 Dimples on the cheeks and chin have long been objects of envy for many people. This contraption from the 1920s provided a fairly simple solution: simply pop it on your face for a night and your cheeks would be perfectly, charmingly indented the following day. That is, until it went away a few hours later.

Eventually inventions like this were tossed out in favor of more permanent surgical solutions, some of which are still around today. 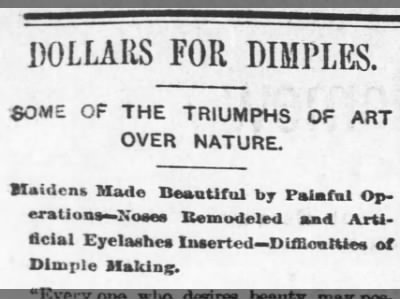 You can find thousands more of ads like these on Newspapers.com. Try the search page for specific results, or browse through the collection to see what there is to be found.

One thought on “Health and Beauty Tips to Skip”