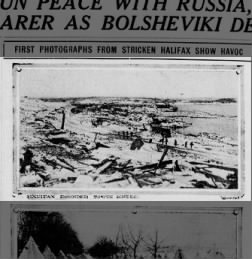 On December 6, 1917, the munitions ship Mont-Blanc exploded in Halifax Harbor, Nova Scotia, in the biggest man-made explosion prior to the dropping of the atomic bombs on Japan during World War II.

While sailing into the harbor on the morning of December 6, the French munitions ship Mont-Blanc—with its cargo of 2,925 tons of explosives for the Allied war effort—encountered the Imo, a Norwegian ship headed to New York to pick up relief supplies for Belgium. The Imo was traveling on the wrong side of the Narrows (the narrowest part of the harbor), and after miscommunication between the two ships, the Imo struck the Mont-Blanc. The sparks from the collision caused some of the Mont-Blanc’s cargo to catch fire, and its crew, unable to stop the fire and knowing what would happen, abandoned ship.

The smoke cloud attracted many onlookers on shore, who came to watch as other ships tried to put out the fire and pull the Mont-Blanc farther from land. But at 9:04 a.m., the Mont-Blanc exploded, incinerating the ship and sending out a powerful shockwave that broke windows up to 50 miles away. 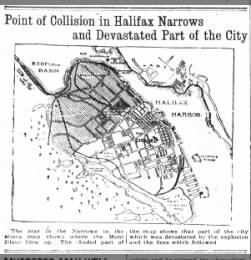 An estimated 1,500 people were killed instantly or nearly so from the explosion and shockwave, as well as from flying glass and debris, collapsing and burning buildings, and the tsunami created in the harbor that crested at 45 feet. An estimated additional 9,000 people were injured, and over the following hours and days, the death toll would rise to 1,952, nearly 500 of them children. 12,000 buildings in a 16-mile radius were damaged, with 1,630 completely destroyed, leaving 6,000 people homeless and many thousands more without adequate shelter.

Almost immediately, the rescue effort began, facilitated by the soldiers and sailors present in the wartime boomtown. Initial rescue efforts were hindered by rumors of a potential second explosion, which caused many people to flee the disaster area. Efforts were also slowed by a heavy snow storm that hit the area the following day. In the hours, days, and weeks that followed, other areas of Canada, as well as the United States and other countries, sent relief supplies, including food, blankets, clothes, money, and medical supplies, in addition to nurses and surgeons. 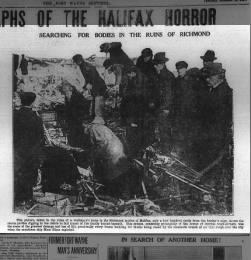 Though a government commission initially determined the following February that the Mont-Blanc held full responsibility for the disaster, higher courts eventually ruled that no one party was to blame.

Do you have any family stories about the Halifax Explosion? Share them with us! You can also learn more about the disaster by starting a search on Newspapers.com.