Getting on Board with Board Games

Board games are a well-loved staple of group entertainment. They have been so for centuries in the world at large, but in younger countries—like the United States—they came around much more recently. So when did board games cross the ocean and become the popular pastimes they are today? What game has the distinction of being the first in America? 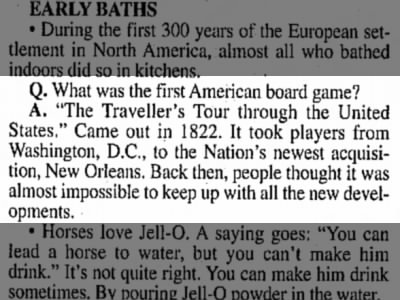 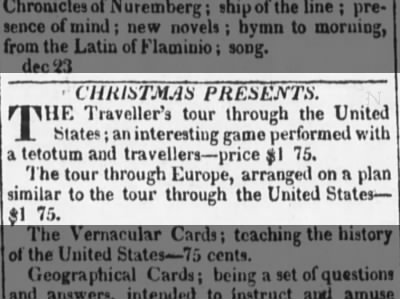 The Traveller’s Tour through the United States is considered to be the first U.S. board game. In an era of Puritan values dice were considered a vice associated with gambling, so players traveled across a map of the states with the help of a spinning, multi-sided top called a tetotum. The object: guess the names of cities and significant places—and in later versions, name their populations. That’s quite the social studies test, even for a time when Louisiana was the country’s western border.

The Mansion of Happiness was exactly what it sounds like: a game all about using good, virtuous values to reach your just reward. It was created in Europe, but appeared in the United States in the 1840s. It was one of the first commercially produced board games in the U.S. and had the added benefit of being morally robust—very important for children and adults alike. 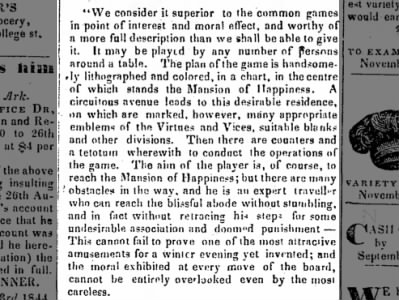 Of course, what would board games be today without the quintessential (and frequently ire-inspiring) Monopoly? The first version of this American claim-to-board-game-fame was created in the nascent years of the 20th century by Elizabeth Magie, who was quite an interesting woman even outside of her game-making. She patented a design that looks very similar to the version of Monopoly we play today. It too was educational in nature, but not in regards to cities or morality. Instead it focused on the evils of land owned by private monopolies. It was called The Landlord’s Game. 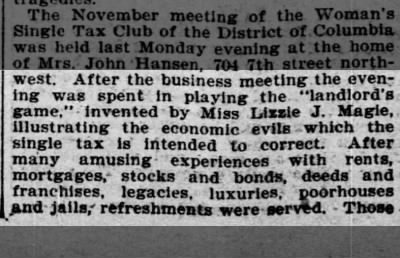 The Landlord’s Game went through several more creators and variations over the next 30 years, until the Parker Brothers released their version of the game in 1935 and called it Monopoly. Now it boasts hundreds of variations and themes and is perhaps the best-known board game in the world.

Find more about the history of United States’ board games, known and unknown, on Newspapers.com. Try a search on your old family favorite or browse through specific papers for other articles of interest to you.