This day marks the anniversary of Apache warrior Geronimo’s surrender to United States government troops. By September 4, 1886, the Apaches were vastly outnumbered. The 30-year fight to defend his homeland was lost and Geronimo’s surrender marked the end of the Indian Wars in the Southwest. 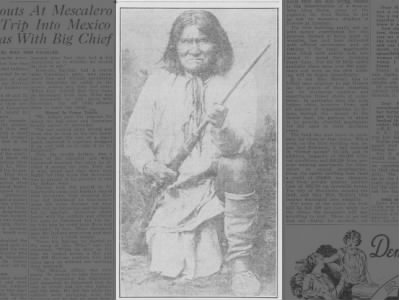 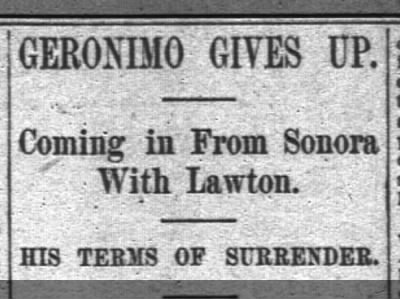 His name is probably familiar to you, but most likely not because of his tireless struggle to preserve the lands of his tribe. 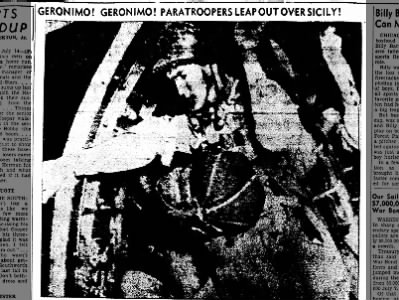 The name “Geronimo” is now most often associated with jumping off of things. As in the clipping above, paratroopers used to cry the name as they threw themselves from their planes. But why Geronimo? 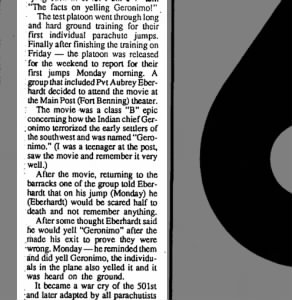 This article refers to one of the very first units to try out group jumps from planes. As the story goes, the group saw a movie (reportedly Geronimo) the night before their first jump after training. Private Aubrey Eberhardt boasted so much about not being afraid to jump that his friends finally called him out on it, saying that he was just as scared as the rest of them. Eberhardt said he’d yell the name “Geronimo” as loud as he could when he jumped to prove that leaping from a plane didn’t scare him a bit. 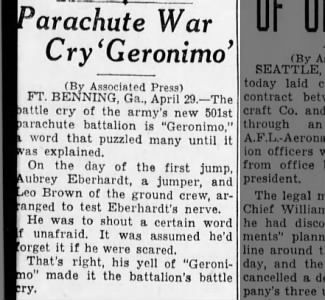 The choice of the name “Geronimo” could have stemmed from a number of things. The actual Geronimo was known for his fierce fighting style and for his apparent lack of self-preservation when he threw himself into the fray, so it could have been this fearlessness that prompted the use of his name. Some also say that it was thanks to the film they saw the night before, in which Geronimo leaps from a cliff as he shouts his own name. Or it could have been, as the articles above state, a weird name that would be hard to remember in the heart-pumping moments before the jump.

Either way, Eberhardt’s shout caught on in his unit and beyond, until “Geronimo!” became so popular that news coverage picked up on the story and the public began to use it too.

For more on the real Geronimo and his surrender, take a look at this search. You can also see more articles about the use of “Geronimo” when jumping here.