Founding Father Benjamin Franklin was a man of many talents. He is still known today for his politics and political theory, interest in science, his writings, and his inventions. It is one of his inventions that this post focuses on today, one that many have never heard of: a glass instrument he called the armonica.

Franklin was inspired to create armonica after watching a performance on musical glasses—rows of partially filled crystal glasses that are played with a dampened finger tip. Franklin was charmed by the delicate, angelic sound of ringing glass and knew there must be a better way to arrange the glass so that it couldn’t be shattered by one careless bump of the leg. 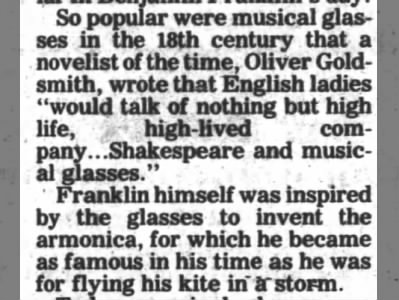 His idea was to put glass bowls on a spindle. The spindle would be spun, and the noise made by applying pressure to the bowls so that they would create friction against the wood. The player still applied wet fingertips to the glass, maintaining the original concept, but the presentation was more stable. 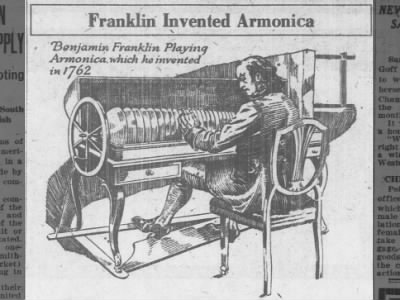 For a while the armonica was rather popular. But, strangely enough, it soon fell out of favor after the instrument was said to cause insanity, nervous breakdowns, and deep melancholy. As the article below states, more recent theories speculate that the lead content in the glass may have cause this idea, though there is little evidence to back that up. Either way, the armonica had basically disappeared from general use in public performance by 1820. 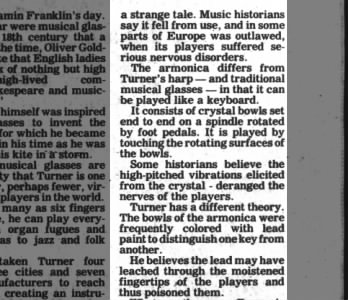 Some armonicas are around today, played by enthusiasts as novelties or on special occasions. On Benjamin Franklin’s birthday, for instance: 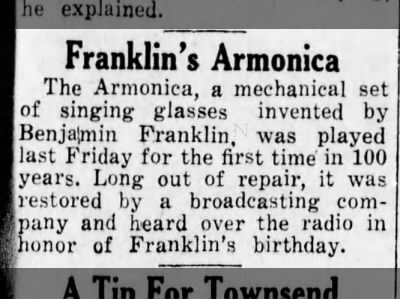 For more on Franklin’s armonica, see the results of this search on Newspapers.com.

One thought on “Franklin’s Armonica”