With a name like Fletcher Christian, you’re bound to have an adventurous life. Recognize the name? Christian is known for his involvement in what is possibly the most famous mutiny of all time.

At the age of 17, Christian enlisted in the Royal Navy as a common seaman. He rose in the ranks quickly, and by 1787 was made Master’s Mate of the HMS Bounty under Commander William Bligh. They set off on a voyage to Tahiti…

…and Bligh and his supporters were put on a small boat and sent on their merry way (with surprising results).

For a handful of the mutineers, the stay in Tahiti did not last long. Fletcher (rightly) guessed that once the mutiny was discovered, Tahiti was the first place the law would look. So he and a small group sailed away with 20 of the Tahitian natives to find the nearest uncharted island. That island turned out to be Pitcairn. Unfortunately, their new island home did not provide the happily ever the mutineers hoped for. As the story goes, the mutineers bickered and the native Tahitian men, who had not come along willingly in the first place, eventually rose up against them. Most of the men died on both sides.

But the massacre didn’t happen before the next generation was born on the island. Descendants of the men who mutinied can still be found on Pitcairn today. 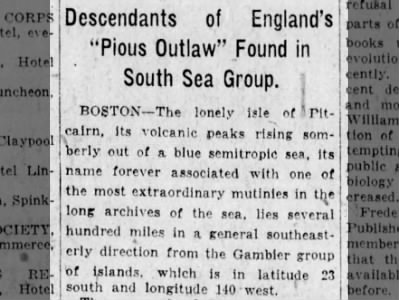 Find more on Christian, The Bounty, the mutiny and Pitcairn with a search on Newspapers.com.