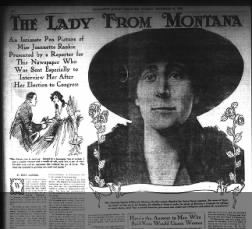 On April 2, 1917, Jeannette Rankin assumed her seat in the House of Representatives, making her the first woman to be elected to Congress.

Rankin was born in Montana in 1880. She graduated from the University of Montana in 1902 and later attended the New York School of Philanthropy (1908–1909), where she studied social work. After a brief time as a social worker in Washington State, she became highly involved in the women’s suffrage movement, particularly in Washington State, Montana, California, and Ohio.

With the financial backing of her brother, Rankin decided to run in the 1916 congressional election (women in Montana had the right to vote by this time). Though some newspapers initially reported that she had been defeated, Rankin won on a Progressive Republican platform that promoted national women’s suffrage, prohibition, child welfare, and pacifism. Just a few days after Rankin took her seat, the House voted on America’s entrance into World War I. Rankin, standing by her pacifist ideals, was one of about 50 members who voted against the war. Rankin served out her two-year term but decided, rather than running for reelection, to run in the Senate race; however, she lost the Republican nomination. 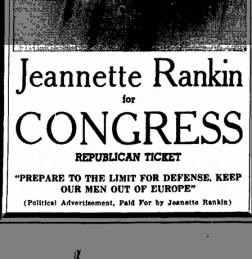 Rankin moved to Georgia and resumed promoting peace and social justice. She eventually returned to Montana, again running for—and winning—a seat in the House of Representatives, this time in the 1940 elections. When Congress voted on entering World War II after Pearl Harbor, Rankin, now in her sixties, voted against war with Japan, the only member of Congress to do so. Her vote caused such an uproar in the House that she escaped to a nearby phone booth until she could get away from the furor.

Though her views on nonintervention were well known, her anti-war vote provoked a major backlash from politicians and newspapers alike, and Rankin declined to run for office again. Until her death in 1973, she spent her time traveling and campaigning for social reform, most visibly pacifism.

Interested in learning more about Jeannette Rankin? There are thousands of articles about her on Newspapers.com. Get started searching here.