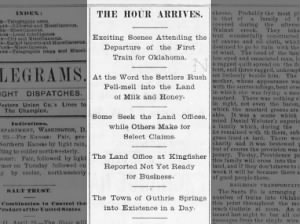 In March, President Benjamin Harrison had announced that land in Indian Territory called the Oklahoma District (land obtained from the Creek and Seminole that wasn’t currently assigned to a tribe) would shortly be opened up to non-Native American settlers. This move came after years of eager homesteaders known as “boomers” trying to illegally settle the land; they were repeatedly removed by federal troops, but eventually the pressure on Washington from boomers, western congressmen, and railroads proved strong enough for the government to agree to allow non-Native American settlers to stake claims in the Oklahoma District.

So on April 22, roughly 50,000 prospective settlers (though some estimates range as high as 100,000) gathered at the borders of the Oklahoma District, waiting for the signal—a gunshot in most places—to begin their race to claim land. At noon the signal was given, and the men (and a few women) moved on foot, on horseback, by wagon, and by train to try to get to the best spots of land first.

While some of these settlers staked out potential farms, others raced to the site of future towns to claim lots for businesses. The chaos led to some pieces of land being claimed by more than one person, or to claims that overlapped. The settlers were also frustrated to find that some of the best land and lots had already been claimed by “sooners,” people who had snuck in illegally beforehand to strike their claims early.

In a single day, almost 2 million acres of land were claimed. The city of Guthrie went from a population of zero to 15,000 on that day, and Oklahoma City similarly went from nonexistent to 10,000 inhabitants.

The land rush of 1889 was just the beginning of a series of land rushes that opened up most of Oklahoma to non-Native American settlement, with the largest occurring in 1893. Through the Dawes Act and other government actions during this time period, the Native American tribes in the region lost approximately two-thirds of the land the government had previously given them.

Learn more about the land rush of 1889 by searching Newspapers.com.