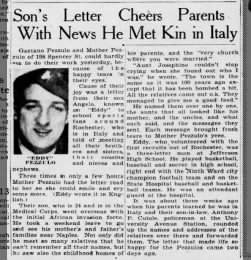 For family members on the home front during World War II, receiving letters from sons and daughters serving overseas was often a happy occasion, as it meant their child was still alive—at least for now. Some families received letters from their children, only to later receive a dreaded telegram informing them of injury or death. Though for a lucky few, the reverse was also sometimes true: the family erroneously received a telegram from the military, only to receive a letter from the serviceman dated after the telegram, letting his family know he was alive.

Due to military censorship, and the servicemen and women’s own desire not to worry the folks back home, the letters were often relatively vague, mostly just letting their family know that they were okay and giving very general details about where they were and what they were doing. Some of these letters were printed or summarized in local newspapers, where you can still see them today. Who knows? You might even find one written by a family member!

Start by exploring the selected letters and articles below:

You can find more WWII letters on Newspapers.com! Try a search like this one as a starting point to find some additional letters, or begin a new search using search terms and dates of your own.