Find: Women Get the Vote 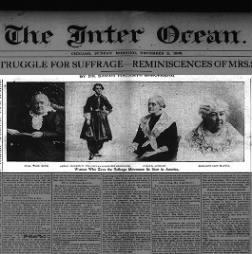 This August is the 95th anniversary of American women gaining the right to vote in all state and federal elections when the 19th Amendment to the Constitution was ratified on August 18, 1920.

Women’s suffrage in America was a divisive issue from the very beginning of the organized movement at the Seneca Falls Convention in 1848. Over the ensuing 72 years, while women gradually won the right to vote in some state and local elections, they continued to fight for full suffrage. Eventually, the suffragists of the 19th century gave way to the “suffragettes” of the 20th century, with their more confrontational tactics, influenced by the militant women’s suffrage movement in Britain.

Though what would become the 19th Amendment was first introduced to Congress in 1878, it took 41 years—and multiple rejections—for it to finally pass. After it was approved by Congress in 1919, it was sent to the states for ratification, where it would need to be approved by the legislatures of three-fourths of the states. Though women’s suffrage had always faced the biggest obstacles in southern states, Tennessee was the deciding 36th state to ratify the amendment by a slim margin on August 18, 1920.

As expected from such a controversial issue, the newspapers of the time were full of articles debating the suffrage question. On Newspapers.com you can follow both sides of the debate from its beginnings in the mid-19th century up through the day women’s right to vote became protected by the Constitution.

Examples of the articles and other features you can find about women’s suffrage include:

Did you have any ancestors involved in the women’s suffrage movement? Tell us about it! Or if you want to learn more about the movement, simply start a search on Newspapers.com.

14 thoughts on “Find: Women Get the Vote”