This month marks the 70th anniversary of Victory in Europe (VE) Day in the final months of World War II. 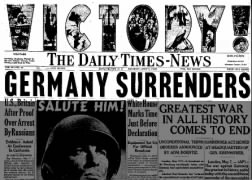 On May 7 and 8, 1945, exultant crowds poured into streets across many Allied nations to celebrate the news of Germany’s surrender and the Allied victory in Europe. Huge crowds gathered in New York’s Times Square, London’s Piccadilly Circus, and other cities to celebrate and let loose after years of fear and tension. Although news broke about the end of the European war on the 7th, it wasn’t officially announced in either the United States or the United Kingdom until the 8th, which was declared “Victory in Europe Day” in both countries (the Soviet Union, however, didn’t celebrate the victory until the 9th).

On Newspapers.com, you can explore front-page headlines from May 7 and 8 and other accounts of VE Day in over 150 papers. Many of the newspapers from the 7th hit the same major stories on their front pages. News of the German surrender was understandably 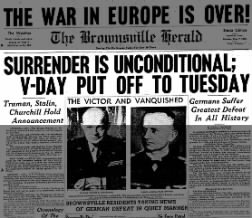 often the biggest headline, but stories of President Truman postponing VE Day until the following day (the 8th) in order to coordinate with other Allied nations was also major news. Another common news item from the 7th detailed how Germany had broken news of its surrender before the Allied nations had. Many papers from the 7th also announced when and where local VE Day celebrations would be held.

Since the major news had broken on the 7th, papers from the 8th often carried follow-up pieces with more details about the surrender. The biggest headlines from the day, however, were typically about President Truman’s VE Day speech, and newspapers—like the speech itself—highlighted the fact that though Germany had surrendered, the war with Japan was far from over. 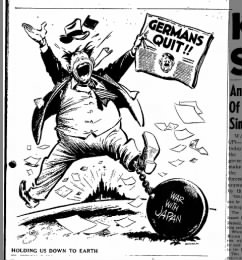 In addition to VE Day headlines and articles, newspapers from the 7th and 8th also featured photos, political cartoons, and business-sponsored propaganda about the Allied victory in Europe. One of the most popular photos showed the crowds in Times Square, but some papers featured photos of local celebrations as well.

Want to learn more about VE Day? You can find thousands of matches by searching Newspapers.com.