Find: Take Me Out to the Ball Game 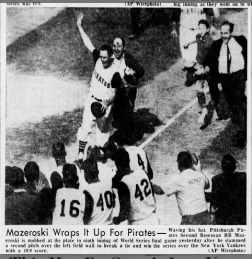 Ready for the World Series? Whether you’re in the spirit already or not, here are some clippings pulled from Newspapers.com of some of the most memorable moments in early World Series history.

Do you have any favorite World Series memories? Tell us about it! Or start a search for World Series stories and images on Newspapers.com.