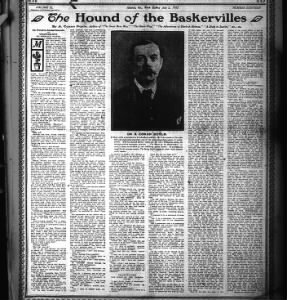 Serial fiction was a bit like today’s TV shows—but instead of a new episode coming out each week, it was a new chapter, or series of chapters, of a story or book, often published in newspapers, magazines, or stand-alone installments. Some of these “serials” came out daily, some weekly, some monthly, some on other schedules, depending on the author and the publisher.

Serials found popularity during the Victorian period, though they first appeared long before that. They remained a fairly common feature of certain newspapers and magazines up until radio and then television took over as people’s main sources of entertainment.

Sometimes entire novels would be written as serials (Charles Dickens famously published some of his novels this way), while other novels would be written and published in their entirety first, and then later segmented out in installments. But not all serials were novel-length: many newspaper serials were just a few installments long, more like a short story or novella, though some did run for months.

Stories published as serial fiction were often tales of romance, mystery, or adventure—with sentimental or thrilling storylines that would catch readers’ attention and have them coming back for the next installment. And they might just hook you too! Try reading one for yourself on Newspapers.com. We’ve collected just a few of them below—some you might recognize, but many you won’t! Try one out and let us know what you think!

Want to read more? To find further installments of the stories above, try checking the next day’s issue of the paper the story was featured in (e.g., if it was in Monday’s paper, check Tuesday’s). If it’s not in that issue, try checking the next issue that falls on the same day of the week (e.g., if it was published on Sunday, check the next Sunday’s issue).

Or if you’re interested in finding other serial fiction on Newspapers.com, try using search terms such as “chapter 1”, and limit your search to papers from the decades around the turn of the 19th century. Get started searching here!