Find: Oh, Give Me a Home Where the Camels Roam… 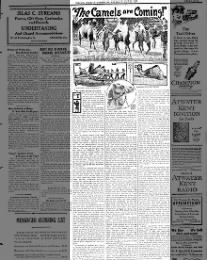 Did you know that in the 1850s the American government brought camels to the Southwest to be used by the army and that 50 years later, feral camels were still being spotted in the desert?

In the late 1840s, Major Henry Wayne of the Quartermaster Department suggested the use of camels to the War Department, and in the mid-1850s Secretary of War Jefferson Davis convinced Congress to appropriate money to import the camels as pack animals for the army in the ever expanding West.

Major Wayne and Naval Lieutenant David Dixon Porter sailed to North Africa and the Middle East in 1856 and came home with some camel handlers and a few dozen camels, which were kept at Camp Verde, Texas. A year later, Porter returned for more camels, bringing the total to about 70.

The camel experiment in the Southwest was relatively successful, as camels were hardier than horses, mules, or burros, traveling farther, packing heavier weights, needing water less often, and being able to subsist on the native desert plants. However, the camels tended to spook the other pack animals, and most of the Americans assigned to them never learned to like them or handle them properly.

The camels’ downfall came with the Civil War. The Confederates took over Camp Verde, but when the US government regained control, it had lost interest in the camel experiment, so the animals were sold (though some had died or escaped during the war).

But that wasn’t the end of camels in the Southwest. Up through the early 1900s, there were occasional reports of sightings of feral camels roaming the desert.

Did you know that you can find articles about the army’s camels on Newspapers.com? Below is a selection of a few of the different articles you can find:

Have you heard of the Southwest’s camels? If you want to learn more about them, start a search on Newspapers.com!

19 thoughts on “Find: Oh, Give Me a Home Where the Camels Roam…”