Find: Looking Back on the Original Star Wars 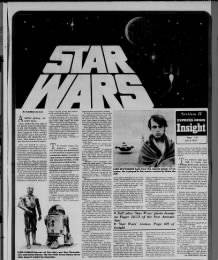 When Star Wars (later retitled Star Wars Episode IV: A New Hope) was released in the United States on May 25, 1977, it was an immediate sensation. Show after show sold out, with many viewers returning to see the film more than once. It received near-universal praise from film critics as well and went on to break all kinds of records for box-office earnings, attendance, and length of run. It surpassed Jaws as the top-grossing film of all time and retained that title until 1982, when it was overtaken by ET, though it still remains one of the most financially successful films.

People went wild for Star Wars, and its popularity is reflected in the plethora of articles and reviews newspapers published about the film. Below is a just a small sample of the tens of thousands of matches you can find for Star Wars on Newspapers.com:

Did you see the original Star Wars in the theater? Tell us about it! Or get started searching for Star Wars on Newspapers.com.

18 thoughts on “Find: Looking Back on the Original Star Wars”