Montana’s nickname is the “Treasure State.” You can join the treasure hunt by exploring our updated archives for newspapers in Montana! We’ve added issues from The Billings Gazette; The Montana Standard in Butte; The Independent Record in Helena; and The Missoulian. 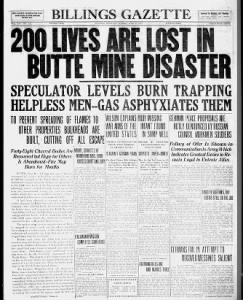 Our archives date back to 1874, two years before the Battle of the Little Bighorn between Native Americans and George Armstrong Custer, and 15 years before Montana achieved statehood!

After parts of Montana were acquired through the Louisiana Purchase, President Thomas Jefferson sent the expedition of Lewis and Clark to survey the land. Clark left his name chiseled on a rock about 25 miles outside of Billings.

The Billings Gazette: The first edition of The Billings Gazette in 1885 almost didn’t happen. A fire roared through the building destroying the press. After salvaging the pieces, the first editorial lobbied for the creation of a fire department. Billings earned the nickname “Magic City” after the Northern Pacific Railway came to town in 1882 and the city experienced rapid growth. Within months, nearly two thousand buildings were erected. The paper recorded the worst train wreck in Montana history when a 1938 flash flood roared through a creek bed weakening a trestle bridge. A train crashed through the bridge sending rail cars plunging into the water below.

The Montana Standard: We have issues dating from 1928. Read how Butte got its start with the discovery of gold, silver and copper. The city earned the nickname “The Richest Hill on Earth,” after billions worth of metals were mined at the Anaconda and other mines. A tragic 1917 mining disaster resulted in the loss of at least 166 lives when a carbide lamp ignited a blaze that spread throughout the shafts trapping miners.

Early Helena prospectors struck gold in 1864, in a creek they named Last Chance Gulch. Helena became the territorial capital of Montana. In 1894, the paper lobbied for Helena to become the state capital. Helena was a gold camp that would grow up to become a permanent thriving city.

The Missoulian: We have issues dating back to 1892! Read about the establishment of the University of Montana in 1895 where Missoula native Jeannette Rankin was educated. She was the first woman elected to Congress in 1916 – before women in American could vote! Rankin was a leader in the suffrage movement and introduced legislation in 1919 that led to the enfranchisement of all women.

To learn more about the rich history of Montana, search our archives at Newspapers.com!