Find: Food Will Win the War! 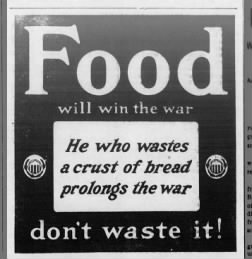 When the United States entered World War I in the spring of 1917, President Wilson asked Herbert Hoover to head the US Food Administration, which would regulate American food from the ground up to ensure there was enough for both American and Allied troops as well as for the citizens of Allied nations experiencing food shortages. Although in reality Hoover predominantly accomplished this through extensive government involvement in the market, his best-known and most publicized method was a public campaign to involve everyday Americans in voluntary food conservation, which quickly became known as “Hooverizing.”

The food conservation effort, with its slogan “Food will win the war,” encouraged Americans to embrace self-denial for a greater good. However, the Food Administration frequently emphasized that it wasn’t suggesting Americans do without, simply voluntarily decrease their consumption of foods needed for the war effort (particularly meat, wheat, sugar, and fats) by substituting other foods instead. Americans were also encouraged to “lick the platter clean” (reduce food waste) and to buy less food by growing “war gardens” and raising chickens in their backyards.

Hoover’s efforts during the war proved successful, and America was able to decrease domestic food consumption by 15 percent and provide $1.4 billion of food aid to Europe over the course of a year. 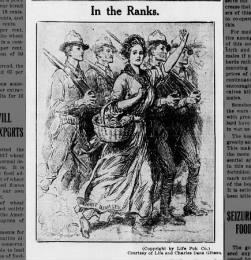 Interested in learning more about Hooverizing? Newspapers.com has thousands of articles, editorials, advice columns, poems, cartoons, ads, and propaganda pieces related to the WWI food conservation effort. Not to mention many recipes to help Americans comply with the Food Administration’s guidelines on conserving food (particularly wheat).

Take a look at some of these Hooverizing recipes you can find on Newspapers.com (and maybe even try out a couple):

Find more items about Hooverizing by starting a search on Newspapers.com!