If you’re looking for some stories to make you shiver this Halloween, you don’t have to look farther than the newspaper, as real-life mysteries can often be the most spine-tingling of all. This being the case, we’ve gathered three famous unsolved mysteries from the papers that will be sure to send shivers up your spine this October. 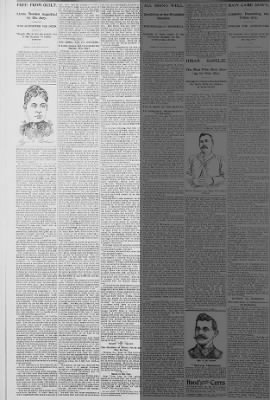 Despite being immortalized by the rhyme “Lizzie Borden took an ax / And gave her mother forty whacks; / And when she saw what she had done / She gave her father forty-one,” Lizzie Borden was actually found not guilty of the ax murders of her father and stepmother. The pair was found murdered at their home in Massachusetts on August 4, 1892, the father struck with an ax 10 or 11 times and the stepmother struck 17. Lizzie, age 32 at the time, was the prime suspect, as she was one of the only people home at the time of the murders. She was arrested and tried but was eventually acquitted, since there was a lack of hard evidence. No one else was ever charged with the murders.

On November 24, 1971, an airplane passenger going by the pseudonym Dan Cooper hijacked a plane flying between Portland and Seattle. Using a bomb as a threat, Cooper requested that he be given $200,000 in cash and 4 parachutes. When the plane landed in Seattle, Cooper was granted his requests, and per his orders, the plane took off once again, headed toward Mexico City via Reno, Nevada. However, somewhere between Seattle and Reno, Cooper jumped out of the plane, likely in southern Washington. Despite a massive search operation, Cooper was never found, and the true identity of Cooper, as well as what happened to him, remains unsolved to this day.

On January 15, 1947, 22-year-old waitress and aspiring actress Elizabeth Short was found brutally murdered in Los Angeles. Most notably, her upper body had been completely severed from her lower half, and her body had been drained of blood. The gruesome nature of her death made it a media sensation, and Short became known in the press as the Black Dahlia. Despite a plethora of suspects and false confessions, no one was ever tried for her murder, and it is still unsolved today.

Learn more about these and other unsolved mysteries on Newspapers.com!