Find: Clippings from the Dust Bowl 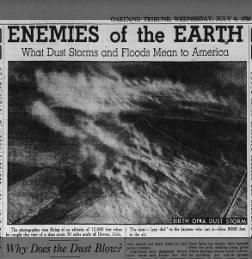 Seventy-seven years ago this month, in April 1939, John Steinbeck’s The Grapes of Wrath was first published. The novel tells the story of the Joads, a struggling family that makes their way to California after being forced to leave their Oklahoma farm by financial hardship and the Dust Bowl. The Joads were representative of hundreds of thousands of Great Plains residents during the 1930s who struggled to make a living during the Dust Bowl, when massive dust storms caused by drought and poor farming techniques swept across the American and Canadian prairies, destroying crops and livestock and thus the livelihoods of many.

If you’re interested in learning what life was like during the “Dirty Thirties”—perhaps to get a better understanding of what your own Midwestern family members lived through—Newspapers.com has a wealth of articles written by the people who experienced it firsthand. Below are some examples of clippings of articles from the Dust Bowl:

Do you have family stories from the Dust Bowl? Share them with us! Or get started searching Newspapers.com for articles related to the Dust Bowl.

14 thoughts on “Find: Clippings from the Dust Bowl”