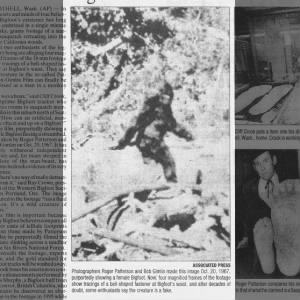 If you think reports of Bigfoot sightings are relatively recent phenomenon, guess again. Accounts of creatures similar to Bigfoot, also known as Sasquatch, have been showing up in American newspapers for at least 200 years!

Take a look at these newspaper stories from the distant (and not-so-distant) past and decide for yourself whether you think Bigfoot is real!

And don’t miss these images!

Want to read more? To find further installments of the stories above, try checking the next day’s issue of the paper the story was featured in (e.g., if it was in Monday’s paper, check Tuesday’s). If it’s not in that issue, try checking the next issue that falls on the same day of the week (e.g., if it was published on Sunday, check the next Sunday’s issue).

Got any Bigfoot stories? Share them with us! Or find more articles about Bigfoot sightings on Newspapers.com.