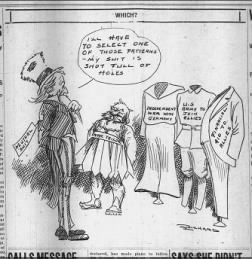 When World War I began in Europe in 1914, the majority of Americans wanted the United States to stay out of the conflict. Although there was a vocal segment of the population who favored “preparedness” (a strengthening of the U.S. military), support for neutrality and isolationism was strong. Industrialist Henry Ford even organized a “peace ship” to sail to Europe in December 1915 to try to encourage peace talks between the belligerents. However, despite the United States’ initial neutrality, many Americans personally sympathized with Britain, France, and their allies, and American institutions lent huge sums to the Allied governments, giving the U.S. a financial stake in the outcome of the war.

Public opinion began to shift away from neutrality following Germany’s sinking of the Lusitania in May 1915, which resulted in the deaths of more than a thousand people, including Americans. Reports of Germany’s atrocities against civilians in Belgium also changed Americans’ opinions, as did the resumption of Germany’s unrestricted submarine warfare in February 1917. The final straw in the shift of American public opinion toward involvement in the war was the discovery of the Zimmermann Telegram, in which Germany encouraged Mexico to declare war on the U.S.

By the time President Wilson declared war on Germany on April 6, 1917, many Americans had reversed their position on neutrality and instead supported American intervention in order to—as Wilson phrased it—make the world “safe for democracy.”

This shift in American public opinion was captured in the newspaper articles and editorials of the time. You can find a sampling of them below via clippings from Newspapers.com:

Find more articles from the debate surrounding America’s entrance into World War I by searching Newspapers.com.