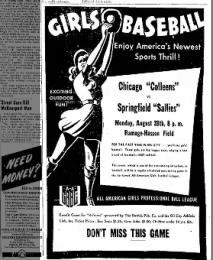 In 1943, worried that World War II and the draft would hurt baseball revenues, Chicago Cubs owner Philip K. Wrigley decided to create a professional women’s baseball league to capture the public interest and bring in money.

The league, mainly centered in the Midwest, began playing in the spring of 1943 with four teams, though that number would grow over the 12 seasons the league lasted. Originally called the All-American Girls Softball League, the league underwent numerous name changes over the years and today is referred to as the All-American Girls Professional Baseball League. The rules of play also evolved over time, with the game initially being more like softball but by its final seasons having become nearly identical to men’s baseball.

In addition to having to make the transition from softball to baseball, players in the league also had to take charm-school classes where they learned grooming and etiquette. Uniforms included shorts covered by a short-skirted tunic, which made sliding to bases painful.

The women’s baseball league did well in mid-sized cities, reaching its peak attendance in 1948 with almost a million people in the stands over the course of the season. In the 1950s, the league began to decline, due in part to the decision to operate teams independently rather than under centralized league control, and the league was finally suspended following the 1954 season.

If you’ve seen the 1992 movie A League of Their Own, the story of the All-American Girls Professional Baseball League may sound familiar, as the film is based on one of the teams in the league. To learn more about the true story behind the film—and see photos of the real-life players—check out these clippings from Newspapers.com:

Do you have any family stories about the All-American Girls Professional Baseball League? Tell us about them! Or find more articles and photos pertaining to the league by searching Newspapers.com.