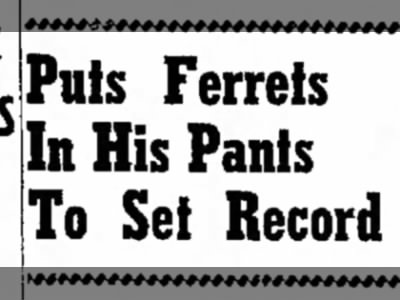 Surely you have heard of some strange sports that exist or have existed in the past, but are you familiar with the time-honored tradition of dropping angry ferrets down your pants? It may take the cake for the most unusual, cringe-worthy sport you’ve ever read about, and, surprisingly enough, it’s still around.

The peculiar past-time known as ferret legging holds an origin shrouded in mystery. Did it start as a bet? A result of poachers smuggling illegal ferrets? The natural next step for hunters who keep their ferrets in their pants to guard against rain and cold? These have all been brought forward as possibilities for the creation of ferret legging, made popular in England (or some say Scotland) in the 1970s. 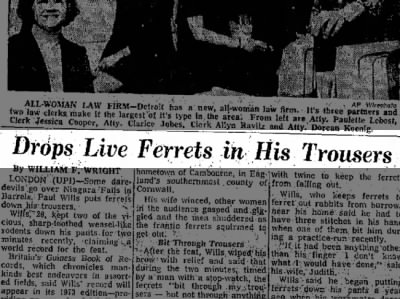 The rules are straightforward: You must have pants and at least one ferret. You can’t be drunk, and the ferret can’t be drugged or have filed or missing teeth. No undergarments are allowed—they would interfere with the ferrets’ wiggling room. The pants are tied at the waist and ankles to keep the animal in the pants, and the competitor endures the ensuing biting, scratching and clawing for as long as he can. He who lasts longest wins! 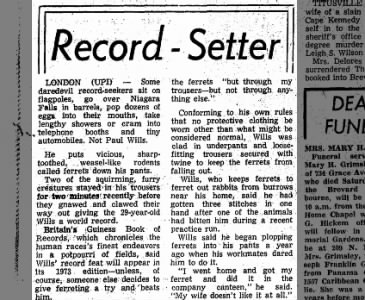 The article above explains the previous record of 90 seconds being beat by Paul Willis, who set the world record in 1972 by withstanding the ferrets for two whole minutes. That might not seem like that long until you remember that he had small carnivorous mammals with razor blades for teeth shoved down his trousers. But his record was eventually broken—shattered, really—by Reg Mellor, who still holds the world record of 5 hours and 30 minutes.

Another article describes a man setting off on a 12 mile charity walk—ferret legging style—but having to stop after two miles because the blood from all the ferret bites was ruining his clothes.

One thought on “Ferret Legging”