But for all their growing prevalence on screen and in literature, women detectives are hard to find in history books. So we searched the historical papers on Newspapers.com to bring you the amazing stories of 3 real-life female detectives you’ve probably never heard of. 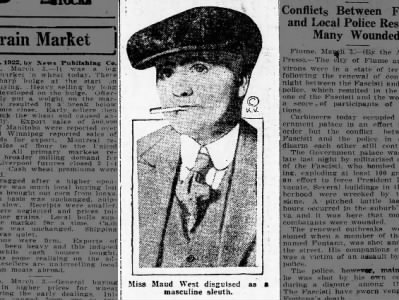 Maud West was a well-known private detective in London in the early decades of the 20th century. Reputed to be London’s only female detective, West opened her agency in 1905 and hired both male and female detectives. For the next 30 years, she investigated a host of crimes, from blackmail and theft, to cheating spouses and even German spies. She claimed to have investigated cases around the world, including in Paris, the South of France, Monte Carlo, Nairobi, and New York.

Famous as a master of disguise, West went undercover as a servant, society woman, nurse, secretary, waitress, fortune teller, and more. She excelled at disguising herself as a man and impersonated everyone from a lowly sailor to a titled Englishman. West reportedly said that she frequently took on male disguises because “A woman […] cannot stand about like a man may.”

In an article that ran in multiple newspapers in 1926, West recounted a case in which a young American woman hired West to investigate her husband. West, using various disguises, trailed him on a long journey that stretched from Paris, to Dover, to London, and then all the way to New York. In New York, she discovered that the “strange American’s eccentricity had turned to medical surgery,” and he had in fact traveled to New York to participate in an illegal human dissection.

~Read more about Maud West in the newspaper~ 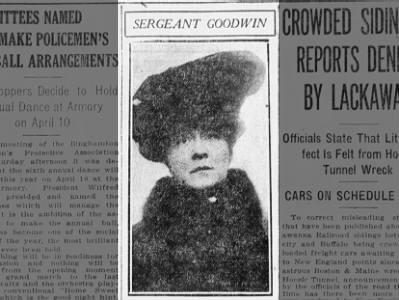 Isabella Goodwin was New York’s first woman police detective. The widow of a policeman with four children to raise, Goodwin was hired as a police matron in 1896. Sometime around 1910, Goodwin was transferred to the detective bureau to assist in investigations, though there is newspaper evidence that she was already helping with investigations by 1902.

In the detective bureau, Goodwin primarily focused on investigating charlatans and swindlers, including fortune tellers, healers, spiritualists, mediums, and astrologers, sometimes going undercover. After proving instrumental in solving a robbery case in 1912, Goodwin was promoted to detective sergeant, first grade, and became the first woman in the New York police department to hold this position. She later also served as assistant to the Special Deputy Commissioner in charge of the Women’s Precinct.

Goodwin remarried in 1921, and in 1924 resigned from the police department after 28 years of service.

The case that made Isabella Goodwin famous occurred in 1912. A group of so-called “taxicab bandits” attacked two bank messengers in Manhattan in broad daylight and got away with $25,000 (more than $600,000 today). Goodwin went undercover as a servant in a boarding house and was able to gather the information needed for the police to arrest the men.

~Read more about Isabella Goodwin in the newspaper~ 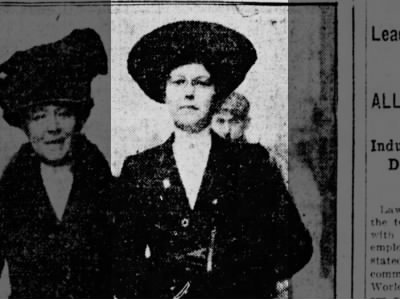 Frances Benzecry was a detective for the medical societies of Brooklyn and Manhattan. A graduate of New York Normal College, Benzecry was hired as a medical detective sometime around 1905. She investigated all manner of fake medical practitioners and healers, who were often suspected of operating without a license.

To catch them, she frequently submitted to their phony treatments and thus gained a reputation as the “most doctored woman in New York.” Benzecry reportedly had more than 75 aliases, but her best known one was “Belle Holmes,” and she was sometimes mentioned in the newspapers by that name. Since her cases occasionally overlapped with those of Isabella Goodwin, the two worked together on multiple occasions.

In 1911, Frances Benzecry (along with Isabella Goodwin) gathered evidence and testified against Willis Vernon Cole, who was arrested and tried for practicing Christian Science healing without a medical license. Benzecry visited his office pretending to have trouble with her eyes and back and paid Cole to cure her through prayer. Cole was initially found guilty, but after a series of high-profile trials, he won on appeal, setting a legal precedent for religious healing.

~Read more about Frances Benzecry in the newspaper~