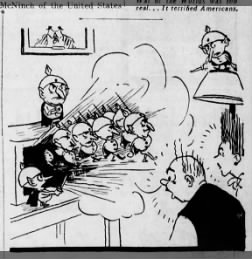 On October 30, 1938, Orson Welles and the Mercury Theatre staged a radio adaptation of the H. G. Wells sci-fi novel The War of the Worlds that fooled at least some Americans into believing that Martians really were invading the United States.

In order to make the adaptation of book to radio more interesting, the show was set up to seem like a normal music program that kept getting interrupted by increasingly alarming, official-sounding “news bulletins” that tracked the violent progress of a Martian invasion centered in New Jersey. Traditional accounts maintain that despite announcements that the show was fictional, vast numbers of Americans thought the broadcast was real. In fact, newspapers the next day carried tales of mass panic and hysteria as listeners allegedly fled their homes, and Orson Welles met with the press to express regret for the confusion.

Recent scholarship on the subject, however, tends to argue that the mass panic caused by the War of the Worlds broadcast was exaggerated by the newspapers of the time. Even according to the papers themselves, not everyone strictly believed the Martian story: those who only caught part of the broadcast or heard the news secondhand often merely believed that a disaster of some kind had struck the East Coast. And many people who had initially been fooled called their local newspaper or police station to verify the story and thus quickly learned that it was fiction. Still, many people were indeed at least initially frightened by the broadcast, and the hysteria reported in the newspapers did exist to some extent, though it was more likely on an individual rather than group level. 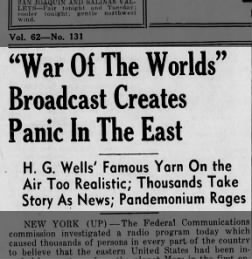 While the 1938 War of the Worlds broadcast might not have been as panic-inducing as originally believed, a similar broadcast in Quito, Ecuador, in 1949 really did cause hysteria. A local version of Orson Welles’ War of the Worlds program caused radio listeners to panic, and when the broadcast was revealed as fictional, their fear turned into an angry riot. The radio station was attacked, causing $350,000 ($3.5 million today) in damage and multiple deaths.

And those aren’t the only instances. Renditions of Orson Welles’ War of the Worlds broadcast also fooled listeners—at least to some extent—in Chile in 1944 and in Buffalo, New York, in 1968.

Did any of your family members experience Orson Welles’ War of the Worlds broadcast? Tell us about it! Or you can learn more about the radio program by starting a search on Newspapers.com.