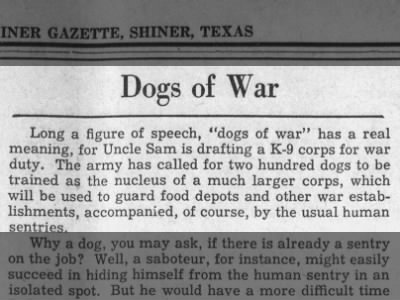 In March of 1942, a letter was signed by Robert P. Patterson, Secretary of War, that officially authorized dogs to be inducted into the war effort. These dogs would be known as the K-9 Corps.

At first it was anticipated that only 200 dogs would be required, but it soon became obvious that the need for these unique members of the military was much greater. Thousands of dogs were sent to be readied for their place in the war effort. They were generally trained for 8-12 weeks before being sent out with their human comrades.

Some were trained as sentries, taught to give warnings through barking or other alerts, and were especially helpful at night. Some sentry dogs were even used in detecting enemy submarines with the Coast Guard. Others became patrol dogs and worked in silence, finding snipers, ambushes, and other sneaky goings-on. With their heightened sensitivities, these dogs often knew about enemy presence up to 1,000 yards in the distance, which was incredibly helpful in keeping their men safe.

The dogs might also have been taught to carry messages as messenger dogs, learning how to move silently and quickly through small spaces and find their allies by scent or intuition. There were also mine dogs—taught to detect trip wires, booby traps, and (as the name suggests) mines—and attack dogs, who learned to attack in addition to being sentry dogs. Casualty dogs were also trained to find wounded men on the battlefields.

Dogs had been used in unofficial capacities before WWII. After World War I a dog known as “Sgt. Stubby” was lauded as a hero. During the war he’d saved his troops from mustard gas, found and comforted wounded men, and once even caught a German spy. The creation of the official K-9 Corps was partially inspired by Stubby’s bravery, fearlessness, and usefulness during that conflict. Stubby was not alone in his canine heroism. Other dogs became famous for their courage during World War II as part of the K-9 Corps. One German Shepherd mix named Chips was brought to the front to be trained as a sentry dog. At one point he broke from his handler to attack a bunker full of enemy gunners, and all four of the men fled only to be forced to surrender to the waiting U.S. troops. Chips continued in his duties that day despite a scalp wound and powder burns on his head where he’d been grazed by an enemy bullet. He was perhaps the most famous war dog of World War II; so famous, in fact, that a Disney movie was made about him called Chips, the War Dog. 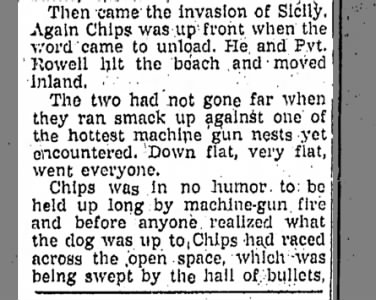 The real-life Chips returned home to his original family, but was soon sent to live with his handler from the war. Many of the war dogs had to be “untrained” after months or even years of being in battles and learning how to exist in a theater of war. Many were successfully integrated back into society and lived happily with the families who had sent them to the corps.

Many other dogs lost their lives during their service, to the dismay of their handlers, troops, and families back home. But all canines in the corps were extremely helpful in protecting and saving the men they worked with. 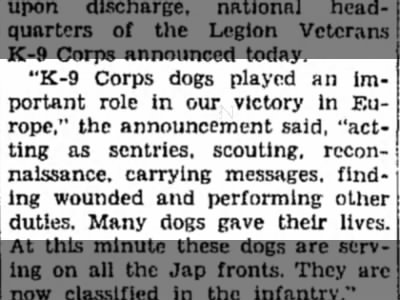 To find more about dogs in the K-9 Corps, as well as in police forces and other public service capacities, try looking at the articles found in this search. You can also try a search of your own on Newspapers.com for a subject or person that interests you.