August marks of the deaths of two of the Wild West’s most famous figures: Wild Bill Hickok and Calamity Jane. Hickok was killed August 2, 1876, at the age of 39, and Calamity Jane died of illness on August 1, 1903, at age 51; both died in South Dakota. 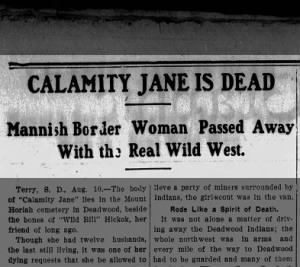 During his life, Hickok was a soldier, scout, stagecoach driver, lawman, gunfighter, showman, marksman, gambler, and more. He died after being shot from behind while playing poker in a saloon. Calamity Jane was a frontierswoman known for her men’s attire, hard drinking, and skill at profanity. She claimed to have been in love with Wild Bill Hickok and even to have gone after his killer with a meat cleaver—though there is no evidence to support this; she is, however, buried near him, as she requested.

Both Hickok and Calamity Jane were famous during their lifetimes, with their legends quickly outgrowing the actual facts of their lives. Hickok gained national fame in 1867, when he became the subject of an article in Harper’s Magazine. Calamity Jane similarly became well known around 1877, when she was used as the basis for a fictional character in the “Deadwood Dick” dime novels.

After the two gained fame, they were regularly mentioned in the newspapers of the time. An excerpt of one article about Hickok from 1870 reads:

“Wild Bill is a man of great physical power and an unerring marksman. He never comes out of a fight second-best. He was at one time surprised by ten guerrillas in a cabin, where he fought and killed them all, being himself pretty well cropped to pieces with their knives.”

While Hickok died at the height of his fame, Calamity Jane outlived hers. An article published in 1903, shortly before her death, describes it thus:

“It is not the Calamity Jane of today […] that you want to remember. She of today is old and poverty stricken and wretched. The country has outgrown her and her occupation is gone. […] It is the Calamity Jane of the old days, the Indian fighter, the scout, the mail carrier, the cow puncher, the man among men, who stands heroic.”

In both of the case of Wild Bill Hickok and Calamity Jane, myth became more important than reality in the public’s perception of them, and they both still remain larger than life today.

If you’re interested in Wild Bill Hickok or Calamity Jane, look for more articles about them on Newspapers.com, especially in our South Dakota papers. Through cooperative projects with the Black Hills Pioneer and the Deadwood Historic Preservation Commission, Newspapers.com has a large collection of papers from South Dakota, where both Wild Bill and Calamity Jane spent significant time.