On January 22, 1901, Victoria, Queen of Great Britain and Ireland and Empress of India, passed away at the age of 81 at the royal residence on the Isle of Wight, marking the end of her 63-year reign. 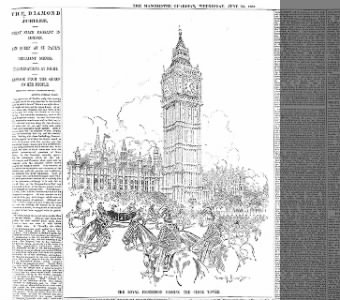 Victoria had celebrated her Diamond Jubilee in 1897, which marked the 60th anniversary of her accession to the throne and made her Britain’s longest-reigning monarch up to that point. By this time, old age had begun to take its toll, and the queen suffered from failing eyesight and had trouble walking, among other health issues. By Christmastime of 1900, which she spent at Osborne House on the Isle of Wight, her health had further declined, and after the New Year she suffered a stroke and was confined to her bed.

Her family was alerted to her poor health, and her children who were able gathered at her bedside—as did her grandson Kaiser Wilhelm II of Germany. Victoria passed away at 6:30 p.m. on January 22. She had written her funeral wishes three years earlier, which included being dressed in white and laid in her coffin with various mementos and keepsakes. Per her request, Victoria was given a military funeral and was laid to rest at Frogmore Mausoleum, in Windsor, alongside her husband Albert, who had died in 1861.

People around the world mourned Victoria’s death. Her reign had lasted 63 years, and for many people, she had been queen for their entire lives. The London Times wrote, the day after her death:

To most of us the whole course of our lives as subjects of the Queen has been the proof of the admirable way in which this unique woman—whose small frame was permeated, so to speak, with Royal dignity, whose home life was so simple and pure, and whose intelligence […] was […] formed by work and long experience into a powerful instrument of life—has met the difficulties of the longest and the fullest reign in English history.

The queen’s death was literally the end of an era. Her death marked the end of the Victorian Era, which spanned 1837 to 1901, the years of her reign. Though just 18 years old at the time she became queen, over the course of her life Victoria oversaw Britain’s transition to an industrialized nation, as well as its expansion into the British Empire.