On the night of September 19, 1881, President James A. Garfield died in New Jersey, largely due to infection that set in after he was shot in the back by an assassin more than two months prior. 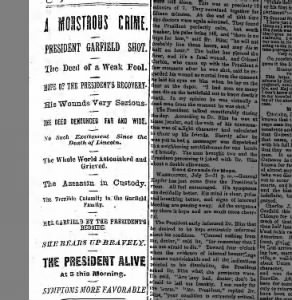 A former Civil War general and member of the U.S. House of Representatives, Garfield wasn’t even one of the candidates for nominee when he attended the 1880 Republican presidential convention. Instead, there were initially three other contenders: former president Ulysses S. Grant, Senator James G. Blaine, and Treasury Secretary John Sherman. However, due to fierce divisions within the party, Republicans were unable to come to consensus on a nominee.

Finally, after more than 30 ballots without a winner, Garfield’s name was suggested. Garfield was acceptable to all the various factions within the Republican Party and quickly won the nomination. In the general election later that year, he beat the Democratic nominee by a comfortable margin in the Electoral College, though his popular vote win was much more narrow.

Garfield took office as president in March 1881, but he did not have time to accomplish much. On July 2, just four months after his inauguration, Garfield was at a train station in Washington DC, when he was shot in the arm and back from close range by Charles A. Guiteau. Guiteau—who believed that it was God’s will that he kill Garfield to save the Republican Party—was apprehended at the scene and willingly admitted to shooting the president. He would be executed a year later.

The wounded Garfield was taken to the White House, where over the next two months he got worse and worse as he developed a serious infection in his back wound, likely due to the unsanitary treatment of his wound by his doctors. The public closely followed newspaper reports of his health, though Garfield’s doctors sugarcoated their accounts of his condition.

Finally, in September, Garfield was moved to New Jersey in hopes that the seaside air would improve his health. But the infection was too severe, and on the night of September 19, Garfield passed away in great pain at the age of 49. He was succeeded by his vice president, Chester A. Arthur, and would go down in history as the president with the second-shortest time in office (following William Henry Harrison, who served just 31 days).

Learn more about the shooting of President Garfield on Newspapers.com.