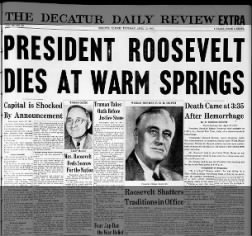 On April 12, 1945, just months into his fourth term, President Franklin D. Roosevelt died in office at the age of 63 after he suffered a massive cerebral hemorrhage (stroke) while visiting Warm Springs, Georgia.

Stricken by polio at age 39, Roosevelt was largely confined to a wheelchair for the remainder of his life. However, this didn’t stop him from becoming governor of New York or, later, president of the United States, winning four consecutive terms spanning the Great Depression and World War II.

Although Roosevelt struggled with his health off and on for many years, it began to seriously decline about a year before his death. By 1944, Roosevelt showed symptoms of congestive heart failure, though the information was kept from the public. 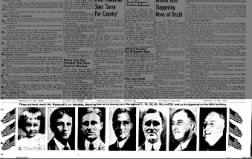 Roosevelt began his fourth term in January 1945, and a few days later he left for a conference at Yalta with Winston Churchill and Joseph Stalin. When he returned a month later, he addressed Congress, sitting down during the speech for the first time in his presidency.

Beset by a poor appetite, lack of strength, and weight loss, in late March 1945 Roosevelt visited Warm Springs, Georgia, his favorite retreat, to try to recoup his health. He was there for about two weeks, and at first, Roosevelt’s health seemed to rebound. But on the afternoon of April 12, he complained of a terrible headache and fell unconscious. He never woke up and two hours later was pronounced dead at 3:35 p.m. 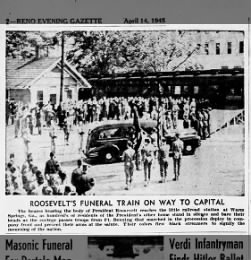 His wife, First Lady Eleanor Roosevelt, came to Warm Springs from Washington DC following Vice President Harry Truman‘s oath of office, and the deceased president’s body was put on a train to DC on the 13th. An estimated 2 million people lined the tracks as the train went by to mourn the president. Following the funeral at the White House, Roosevelt’s body was interred at his family home in Hyde Park, New York, on the 15th.

The president’s death came as a shock to Americans, who hadn’t been aware of Roosevelt’s poor health, though after his death, stories of his illnesses began to circulate. Many sincerely mourned Roosevelt’s passing, as he had led the country through the Great Depression and all but the end of World War II and was seen by many as a charismatic and confident leader, despite his sometimes controversial policies.

Want to learn more about President Roosevelt’s life and death? Start a search on Newspapers.com.