On September 15, 1896, more than 40,000 people crowded at the train tracks near Waco, Texas. Each eagerly awaited the moment when two locomotives traveling at full speed on the same track would collide in a magnificent moment of twisting metal and mayhem. The train crash was a planned publicity stunt to revive the Missouri, Kansas and Texas Railroad, commonly known as the Katy. 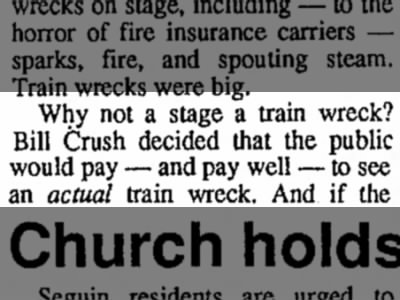 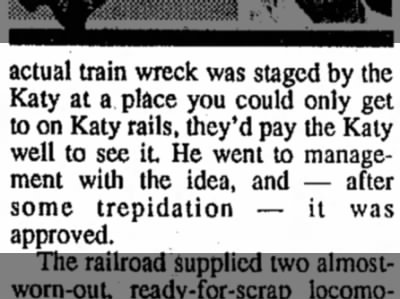 The event was the brainchild of a man named William Crush, and you’ll probably not be surprised to hear that he was a friend of famous showman P. T. Barnum. Crush figured that a theatrical train wreck would help the Katy in a time of economic downturn. This proved to be true, but despite many careful precautions the wreck did not go as Crush had intended. 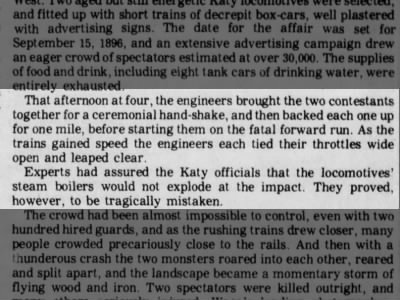 The trains, carrying 6 boxcars each, both backed up a mile on the hills that surrounded a valley full of excited spectators. On a signal from Crush, the train conductors opened the throttles, tied down the whistles, and jumped free. The trains rushed toward each other, collided and careened from the tracks in a gloriously entertaining way. Then the boilers exploded. 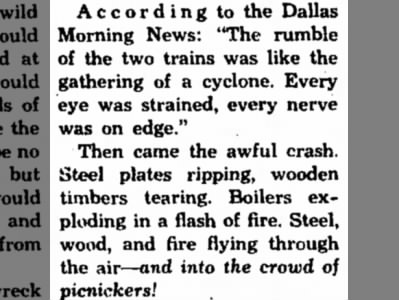 Three were killed and many others wounded from the unanticipated shower of shrapnel. Crush was fired and then almost immediately rehired as the company realized his stunt—though deadly—had done exactly what it was meant to do. Business soared thanks to the publicity of the accident. 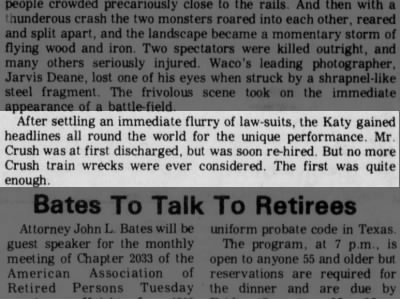 For more on Crush and his literal train wreck of a publicity stunt, take a look at the results of this search on Newspapers.com.