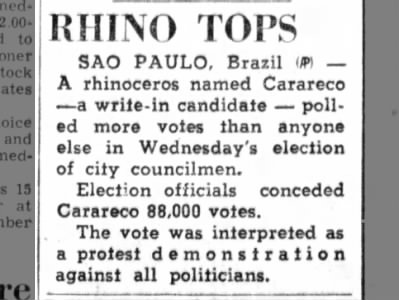 Ever wondered if write-in submissions sometimes end up winning their elections?

In 1959, Carareco the rhino was added to election ballots for city council printed up by students in Sao Paolo, Brazil. Thousands of people submitted the ballots and in the end Carareco received around 100,000 votes, winning the election by a landslide. In fact, the two-ton victor had garnered one of the highest local candidate totals ever counted in Brazilian history.

After she won, Carareco’s zoo keeper asked that the rhino receive a councilman’s salary. Alas, officials in charge of the election did not seem to think a rhino would make a good councilman and nullified the election before Carareco could receive her well-deserved earnings. Shame.

Check out Newspapers.com for more pranks and politics!