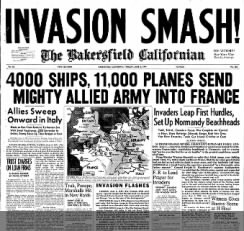 As a main method of mass communication, newspapers have historically been the primary way Americans learned the details of the wars and battles affecting their country. Newspapers.com, with content from every war from the American Revolution to the Iraq War, provides a valuable look at not just what newspapers cover when it comes to war, but also how they cover it.

Take the Battle of Antietam in the Civil War, for example. The New York Times, a Northern paper, announced it as a “great victory” for the Union and “an epoch in the history of the rebellion, from which will date the inauguration of its downfall.” In contrast, the pro-Confederate Richmond Examiner, as quoted in the Raleigh Semi-Weekly Standard, said of Antietam and the surrounding battles that the Union’s “grand coup has failed after the most prodigious effort the North has yet made in the field.” But not all Southern newspapers were necessarily pro-Confederacy. For instance the Newbern Daily Progress, a North Carolina paper forced by Union occupation to reopen with a new pro-Union owner, called the battle a “total rout of the Rebels.” 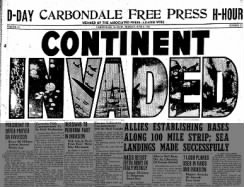 A town’s or newspaper’s priorities could also affect a paper’s war reporting, as can be seen in headlines following D-Day. In the vast majority of American newspapers, the invasion dominated the front pages with huge headlines proclaiming “Invasion Smash!” and “Continent Invaded” and “Allied Forces Storm Europe.” However, in a few papers—like the Algona Upper Des Moines of Iowa—the invasion didn’t make the main headline. In fact, the Algona paper relegated the D-Day invasion to a secondary headline, choosing instead to focus on local primary election results.

Even within the same newspaper, opinion could change over time based on wartime events. Just compare these two WWI-era articles, only six months apart, to see how the Washington Post’s opinion of German submarines in American waters shifted following Germany’s resumption of unrestricted submarine warfare:

So many factors influence how newspapers tell their stories, especially when it comes to war and other divisive topics. Explore Newspapers.com to find more wartime coverage, or search for other subjects that interest you.