Collaboration with the UNC Libraries 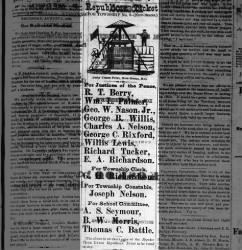 Recently, Newspapers.com has been working with the University of North Carolina (UNC) Libraries to digitize newspapers in their North Carolina Collection: roughly three thousand microfilm reels, or about two million pages, of pre-1923 newspapers. But the partnership doesn’t stop there. UNC professor Robert Allen is incorporating these newly digitized papers—as well as Newspapers.com—into his Spring 2014 first-year American Studies seminar.

The seminar, called the Family and Social Change in America, studies genealogy and family history as a window to wider social and historical issues and uses ever-growing digital archives—such as Newspapers.com—to do so. Professor Allen’s students have used the papers available on Newspapers.com to do research on subjects such as Lebanese migration in North Carolina, the lives of African American craftsmen in the city of New Bern, and the search for “lost” family members following slavery via “information wanted” ads. The students’ work was spotlighted on the UNC website. 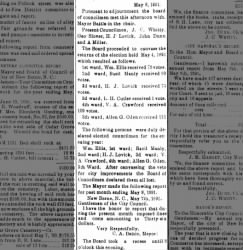 In the New Bern project, the students used Newspapers.com—in addition to records available through Ancestry.com—to expand the research done by Catherine W. Bishir in her book Crafting Lives: African American Artisans in New Bern, North Carolina, 1770-1900 (UNC Press, 2013). Each student took a craftsman discussed in the book and looked for further information on that person.

As the students combed Newspapers.com, they found interesting examples of the artisans’ high level of involvement in their community. For example, one newspaper article announces brick mason Thomas Battle running for election to the school committee, and another reports that artisan Allen Oden was elected as a city councilman in 1891. But some of the artisans’ everyday achievements were documented in newspapers as well, as shown by an 1882 article that remarks on Oden’s thriving corn crop. 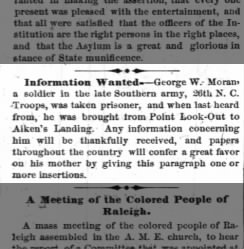 In the “information wanted” project, Allen’s students similarly used Newspapers.com and Ancestry.com to explore and extend Heather Williams’ research in her book Help Me to Find My People: The African American Search for Family Lost in Slavery (UNC Press, 2012). The students found “information wanted” ads in newspapers from North Carolina and beyond that illustrate African Americans’ post–Civil War attempts to find family members dispersed by slavery, war, and migration. One poignant example found on Newspapers.com documents a father’s 400-mile journey in search of his 11-year-old son in 1870.

2 thoughts on “Collaboration with the UNC Libraries”