This month we’re excited to announce that our Canadian newspaper archives are expanding! We’ve added several papers from publisher Postmedia Network and will be adding more pages and titles through 2019!  We have papers from Ontario, Québec, British Columbia, Alberta, and Manitoba. Here’s just a sampling of what you’ll find. 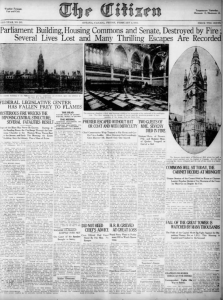 The Montréal Gazette: Founded in 1778, the Montréal Gazette is one of the oldest newspapers in North America. Though originally published in French, the Gazette has been English-only since 1822. Montréal is Canada’s second largest city and established itself early on as an important center for the fur trade. Our earliest issues date back to 1857 when the Gazette published this ad for fur coats made from beaver, doeskin or Siberian fur. This story printed in 1858 teaches readers how to care for and clean their furs. In the late 1800s, expansion on the St. Lawrence River canal system began. The river provided a water shipping corridor and the Grand Trunk Railway provided a land connection, enabling Montréal to undergo rapid growth industrialization. The Gazette recorded births, marriages, and deaths of many of Montréal’s citizens. It also reported on a tragic fire in 1927 at the Laurier Palace Theatre that killed 78 children who had gathered to watch a silent film.

The Calgary Herald: With issues dating back to 1888, we have papers chronicling life in Calgary for the past 130 years! The Herald was initially published in a tent at the junction of the Bow and Elbow rivers in 1883. Early on, Fort Calgary was established as an outpost for the Mounted Police. As homestead land became available, the population grew along with Calgary’s mining and ranching industries. The world-famous Calgary Stampede started in 1912 and celebrates that ranching heritage. In 1914, the discovery of oil at the Dingman well created a frenzy that died down as the First World War began.

Edmonton Journal: In 1903, around the time Edmonton got its first railway, three newsmen printed the first edition of the Edmonton Journal in the back of a fruit store. The population was just 4,000 back them, and the Journal has chronicled the growth for the past 115 years! In 1947, the Imperial Oil Company struck a rich deposit of “black gold.” The oil discovery sent the population of the city booming and cemented Alberta’s reputation as a province rich in oil and gas.

The Ottawa Citizen:  Royal Engineers set up a campsite in present day Ottawa during construction of the Rideau Canal (now a UNESCO World Heritage Site). In 1845, the Citizen published its first edition and 12 years later Ottawa was named Canada’s capital by Queen Victoria. Our archives begin in 1898 and cover notable events like the great Ottawa-Hull fire that destroyed a large tract of Ottawa and most of Hull in 1900. The “Social and Personal” column is a great place to search for historic news of your Ottawa ancestors!

Our Canadian newspaper archives are a great way to research your Canadian ancestors or Canadian history. Check back often as we’re updating this collection regularly. Get started searching our Canadian archives today!

21 thoughts on “Canadian Collection of Newspapers!”