On July 28, 1932, U.S. troops expelled thousands of American World War I veterans—known as the Bonus Army—from their camps in Washington DC, after months of protests and marches by the Bonus Army failed to result in legislation that would allow them to receive promised government funds early. 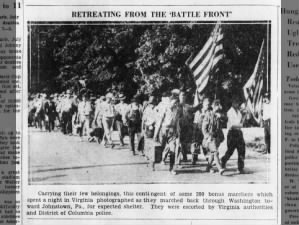 In the years following World War I, Congress passed legislation that would pay veterans of the conflict an adjusted “bonus” compensation for their time in the service, to be paid out in 1945. However, when the Great Depression struck, many veterans were out of work and wanted the government to pay them the money immediately rather than in 1945.

Starting in May 1932, veterans from across the country made their way to Washington DC to lobby and show their support for a bill introduced in Congress that would pay them their money early. Soon, an estimated 11,000–20,000 veterans—who quickly became known as the Bonus Army, or Bonus Expeditionary Force—as well as some families, crowded the capital, setting up massive camps in the area.

On June 15, the bill was passed in the House of Representatives, but it failed in the Senate two days later. The veterans were disappointed, but they largely reacted peacefully and many returned home—though thousands still remained in the capital.

In late July, after Congress had adjourned, the government decided that the veterans should vacate the abandoned buildings they had occupied along Pennsylvania Avenue. However, the veterans refused to leave, and on July 28 violence broke out between veterans and police, resulting in the deaths of two veterans.

The district commissioners requested that federal troops intervene, and hundreds of infantry and cavalry were sent out, led by General Douglas MacArthur. The troops used tear gas, bayonets, sabers, and tanks to push the veterans out of the downtown area, and then MacArthur proceeded to likewise clear out the veterans’ main camp at Anacostia Flats, which went up in flames.

Though the government claimed that the troops only used minimal force, and alleged that many of the marchers who were routed were radicals and criminals rather than veterans, the public largely reacted negatively to the use of federal troops on the veterans. The incident increased the public’s dissatisfaction with President Hoover, who would lose reelection that fall. The early bonus payments the veterans sought would not be approved until 4 years later, in 1936.