Take a break from the typical shark attack stories with these 3 unusual—but true—shark encounters!

Sailor Says Shark Saved His Life
When a seaman is forced to jump from a sinking ship into shark-infested waters during World War II, you don’t normally expect his story to end with a shark saving his life. But that’s what happened to Charley Matthews. 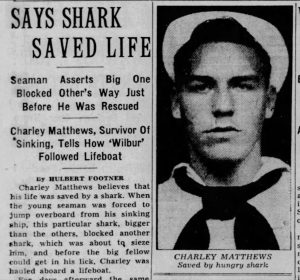 After a series of explosions sank his ship, 17-year-old Matthews hit the water only to hear others shouting “Sharks! Sharks!” He was about a block-and-a-half’s distance from a lifeboat, which he managed to reach despite torn ligaments in his knee. But when he reached the lifeboat, it was already overcrowded, and the man in command refused to let him on. That’s when Matthews noticed a shark approaching him.

But before the shark could reach him, a bigger shark blocked it. Matthews gave up hope, believing that the big shark would attack him itself, but instead he felt hands dragging him into the lifeboat. The big shark that had unintentionally saved him (which Matthews named Wilbur) and other sharks followed the lifeboat until the men were rescued 5 days later.

Shark Eats the Evidence
Important evidence for a trial can be found in all manner of unexpected places, including the belly of a shark. 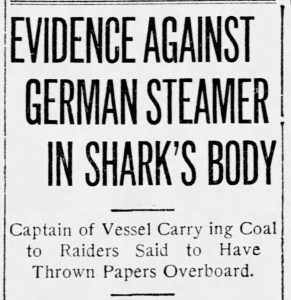 It was 1915, relatively early in World War I, and officials of the Hamburg-American Steamship Line were set to go on trial in the United States for violating American neutrality laws.

Important to the government’s case were the ships’ clearance papers, but there was a problem. When one of the Hamburg-American ships had put in to port in Brazil, the captain dropped the papers overboard in a waterproof bag and then claimed they were lost.

But luckily for the U.S. government, a shark happened to eat the papers when they were tossed overboard. Then that same shark was later caught by the crew of a Brazilian warship, who, when they opened up the shark, discovered the papers in its stomach. This chain of events might sound a little too convenient, but nevertheless, there was a government witness prepared to testify to it under oath at the trial.

Bitten by a Dead Shark
You might think that if a shark is dead, it no longer poses a danger, but in 1950 23-year-old Lola Allison of Australia learned differently. 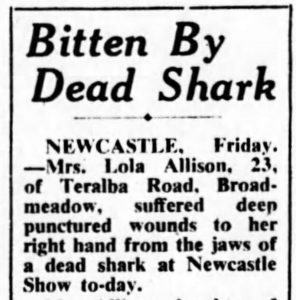 The daughter of the proprietor of a “man-eating sharks” sideshow, Lola was trying to pry open the jaws of a 7-foot nurse shark when the stick she was using snapped. The shark’s jaws clamped down, and she suffered deep puncture wounds to her right hand.

Similarly—and also in Australia—9-year-old Leonard Balmer was taking a shark’s jaw to school in 1961, when he slipped, and the shark’s teeth gashed him on the leg.

And lest you think these things only happen in Australia, in Florida in 1935, a county commissioner was prying open the jaws of a dead shark for a photograph, when the jaws snapped shut and caught the man’s finger.

5 thoughts on “Beyond Shark Attacks: 3 Unusual But True Shark Stories”