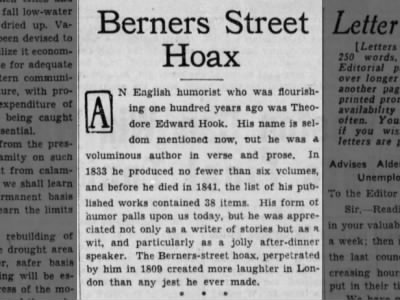 The great thing about newspapers is that while they recount many notable and significant events throughout history, they also never lack in stories of the comical or bizarre variety. The Berners Street Hoax is an excellent example of the latter type of news and is fortunately mentioned time and time again, occasionally with great detail, in the articles of years past.

In 1810, playboy and practical joker Theodore Hook made a bet with his friend that he could make any house in London the most spoken of address within one week. The bet was taken up, and Hook began his mischievous plan. He targeted 54 Berners Street, a previously unremarkable, ordinary place with nothing to distinguish it from surrounding homes. But as you can see from the many newspaper articles that reported on the event, Hook’s tactics were successful in making this address a talking point, even years later. 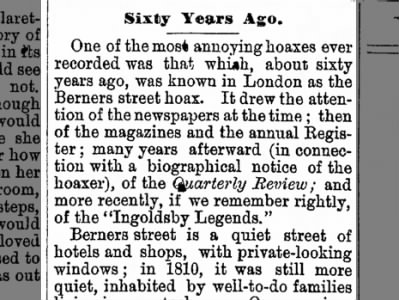 The prank was accomplished with a deluge of letters, which Hook sent to craftsmen and dignitaries in the name of the owner of 54 Berners Street, Mrs. Tottenham. On November 27 the deliveries began to arrive, starting in the very early morning and continuing nonstop until evening. Cake bakers, shoemakers, lawyers, vicars, grocers, and the Lord Mayor of the City of London were only some of those that responded to “Mrs. Tottenham’s” inquiries. 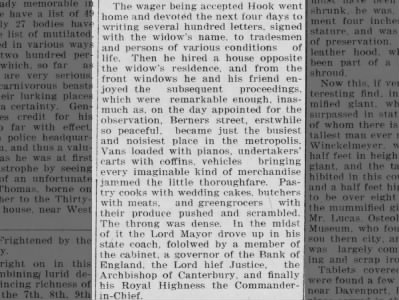 The streets were packed with confused tradesmen and onlookers, and all the while Hook and his friend sat in the house across the street, watching the events unfold. After the comical kerfuffle, Hook made himself scarce and was never caught, although several suspected who the perpetrator was. And just as he’d planned, the confusion and bustle that occurred on the normally peaceful Berners Street became the talk of the town.

For more on the Berners Street Hoax, this search in Newspapers.com has many results about the story. The search page and browse page are also great resources for finding other weird history or learning about your own ancestry.