On this day in 1866, children’s author and naturalist Beatrix Potter was born. Her family was wealthy enough that Beatrix and her brother were taught at home in a school room, in which they kept a good deal of small pets like rabbits, mice, a hedgehog, and many others. Beatrix was devoted to her pets and they were no doubt a source of inspiration for her books; she grew up drawing them and studying them and often took them with her on trips. 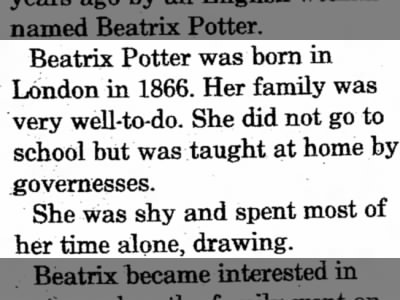 Potter was always very curious about the natural sciences, and an avid observer. She became especially interested in naturalism and mycology, the study of fungi, and often made detailed illustrations of the things she studied and saw. In 1897 she even wrote and submitted to the Linnean Society a scientific paper based on her own theories on the germination of fungus spores, though because she was a woman she was not allowed to present it or attend the proceedings.

Of course, Potter is best known for her work in children’s literature. Though it took a while for anyone to accept her first book, The Tale of Peter Rabbit, it was finally published in 1902 and was immediately successful. For decades she continued to write short, charming tales centered around small creatures like the ones she’d grown up drawing, usually publishing two or three every year. 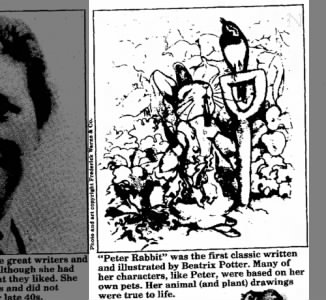 Later in life she married lawyer William Heelis, and lived with him in the country. Her interests only continued to grow, extending to farming and land preservation. When she died in 1943 she gave a sizable donation of land to the National Trust, the largest gift they’d ever received at the time. The lands were preserved and remain part of the Lake District National Park today. 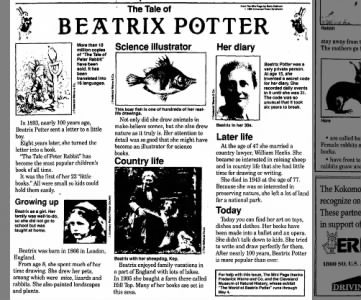 For more articles about Beatrix Potter’s life and legacy, look through the results of this search on Newspapers.com. Try to search or browse the collection today for papers and topics that interest you.