No doubt you’ve heard of P.T. Barnum, famous showman and founder of the Barnum & Bailey Circus. Along with his talent for business and spectacle, Barnum is known for his myriad hoaxes. At age 25 Barnum took his first step into showmanship with the purchase and exploitation of an elderly African-American slave named Joice Heth.

When Joice Heth was sold to Barnum in 1835, she was blind and mostly paralyzed, only able to talk and slightly move her right arm. He exhibited her as the former nurse of George Washington. Yes, the very same man who was first president of the United States, who had been born over a century earlier. Naturally, Heth was paraded around as a curiosity for being an unbelievable 161 years old. 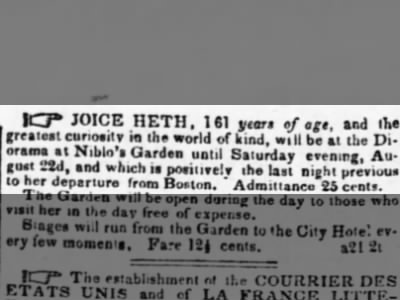 There is some uncertainty about the origin of her story—according to Barnum, Heth’s age and history were told to him by her previous owner, and Heth played her role with no instruction. She sang old hymns, recounted stories about her time as Washington’s nurse and made Barnum a whole lot of money in the process.

Yet some (well, many) doubted the truthfulness of Barnum’s claim. So when Joice Heth died a year later, he arranged for a public autopsy—at 50 cents a ticket, of course. Leave it to Barnum to find a way to make money off morbidity. The autopsy showed that Heth could not have been more than 80 years old. Despite this misleading start to his career, Barnum went on to further fame in the business of spectacle and curiosity.

For more on Joice Heth, take a look at the results of this search on Newspapers.com.