On August 6, 1945, the American B-29 bomber Enola Gay dropped an atom bomb on Hiroshima to devastating effect. 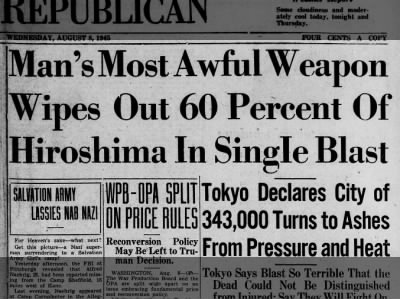 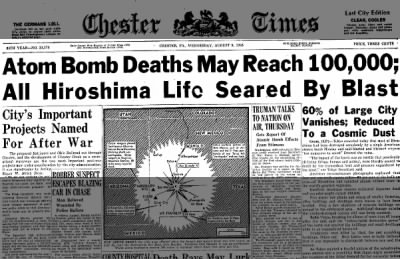 The Pennsylvania paper that printed the above headline was unfortunately pretty close with its estimation: the bomb killed 80,000 people on impact, and another 60,000 would die over the next few months as a result of fallout. Thousands more were injured and more than half of Hiroshima’s buildings were reduced to rubble.

“Little Boy,” as the bomb was nicknamed, was the world’s first atom bomb. It was used in an attempt to bring an end to the war and prevent what was predicted to be an even greater loss of life through continuing warfare and invasion of Japan.

Find more about this event using this search on the Enola Gay, or this search on the bomb and Hiroshima. Try a new search on any other detail of the attack or on a different subject altogether using the search page, or browse Newspapers.com‘s collection here.

2 thoughts on “Attack on Hiroshima”