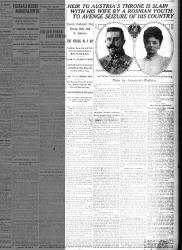 On Sunday, June 28, 1914, America’s major headlines revolved around the Mexican Revolution and Teddy Roosevelt’s ill health. But the next day, headlines the world over were focused on one thing: Archduke Franz Ferdinand, heir to the Austro-Hungarian Empire, and his wife, Sophie, had been assassinated on the 28th in Sarajevo, Bosnia.

The imperial couple had traveled to Sarajevo to review military troops and were on their way to the town hall when a Serbian nationalist threw a bomb at their car. It bounced off and instead exploded under the next car in the motorcade, injuring members of the imperial entourage and nearby spectators. Unharmed, Franz Ferdinand and Sophie continued on to the town hall, after which they decided to change their plans and visit the hospital where the wounded entourage members were being treated. 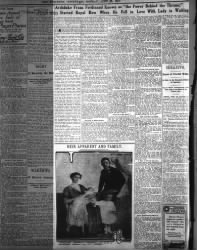 Unfortunately, their driver made a wrong turn and partway through the journey had to stop the car. As fate would have it, another member of the assassination plot, 19-year-old Bosnian Serb Gavrilo Princip, happened to be in that exact location, and as the car stopped, he shot the couple at close range. The archduke was hit in the neck, and his wife was hit in the stomach; both died from their wounds soon after.

The next day, newspapers exploded with details of the tragic event, and many papers took the opportunity to also publish other articles about the Hapsburg imperial family. The controversial yet romantic marriage between the now-deceased archduke and his morganatic wife was a popular news feature, as was conjecture on how the deaths would affect the already tragedy-stricken elderly emperor.

There were also numerous articles speculating on the political effect this would have on the tense relationship between the Austro-Hungarian Empire and Serbia. While many correctly forecasted that the assassination would have a disastrous effect that might ripple out to other European nations, some predicted that the death of the unpopular archduke might actually stabilize peace in Europe instead.

But even the most pessimistic of experts couldn’t have predicted that the tragedy would quickly spark a war that would last more than four years and result in upwards of 37 million dead, missing, or wounded soldiers.

Find out more about this instigating event of World War I—or learn how your ancestors’ communities reacted to news of the assassination and later war—on Newspapers.com.