April Fools’ Day is back again—favored holiday of pranksters and jokesters, bane of the gullible and trusting. As happens with holidays like this one, informal though it be, newspapers across the United States have time and time again taken the opportunity to add their thoughts on the peculiar tradition of tricks and hoaxes played on many an unwitting recipient. The articles range from the ambiguous origins of the day to hilarious stories of perfectly executed pranks or depressing accounts of disastrous mistakes. 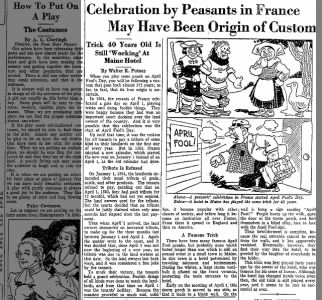 The most frequently mentioned reason for this day of hoaxes and foolery comes from 16th century France. The French peasants, unwilling to pay a tribute to their landlords on the freshly acquired New Year’s Day of January 1st, continued to maintain that since it had not yet been a year since their last annual payment, the original first day of the year, April 1st, should be the day when they would give their offering of grains and livestock. This was accepted as fair, but when April 1st came around it was decided by the court that as it was no longer the beginning of the year, no tribute was due to the land owners. Obviously the peasants found it hilarious that they had cheated the landlords of their payments through this trick, and to celebrate they did all sorts of silly, goofy things to mock the land owners and have a good laugh at their expense. 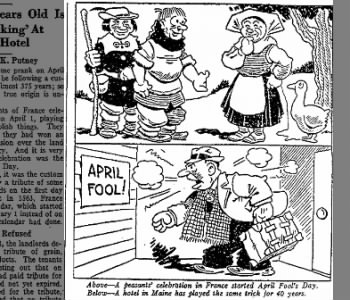 A less complex but still similar story relates that there were some who wouldn’t (or simply forgot to) celebrate January 1st as the new first day of the year, deciding instead that it was still on April 1st. The more adaptable folk called them April Fools, or poisson d’Avril (April Fish).

There are harsher explanations too, like the one from medieval times that suggests people played tricks on insane asylum patients and then laughed at them, or that it possibly derived from the mockery and abuse of Christ by his foes. These origins are a bit heavy, however, and it seems unlikely that such an absurdly ridiculous holiday would come from such serious and cruel beginnings.

Noah releasing a dove on the ark provides the explanation for another potential origin. Since he sent a bird to find land before land was available—essentially sending it on a “fool’s errand”—we now replicate the experience by sending our friends on equally foolish missions. 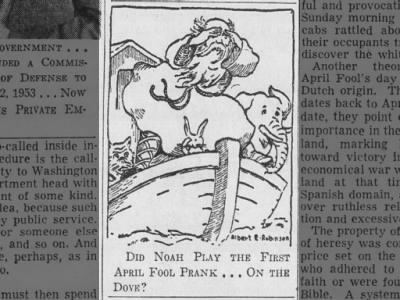 Pranks played on the first of April are varied and span years past, some original and crazy, some traditional and demure. Here are just a few images of silly pranks or lists of ideas to get your trickster juices flowing:

If you’re interested in finding more records of tricks and hoaxes played on April Fools’ Day, you can search “April Fools pranks” on Newspapers.com, or try your own search for even more specific results.

One thought on “April Fools”