On first glance, Annie Edson Taylor seems like your typical matronly schoolteacher. But if you know her name or her history, you’ll know why that isn’t entirely true. 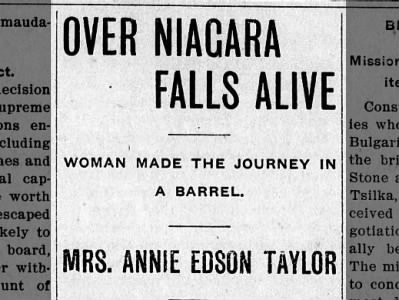 Taylor was, in fact, a schoolteacher. She kept this profession until her infant son died, followed soon after by her husband. Widowed and worried, she moved from job to job in an attempt to secure money for her future with very little luck. With the threat of the poor house hanging over her head she decided to make money another way—by becoming the first person to survive a trip in a barrel over Niagara Falls. 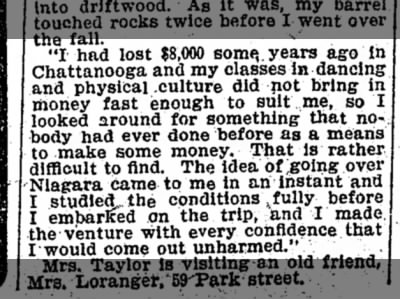 October 24, 1901, saw a calmer river than previous days. It was Taylor’s 63rd birthday. She climbed into the barrel in an “abbreviated skirt,” having instructed the men helping her to stand far off for the sake of decency, and was shortly packed in with pillows. The barrel was closed and observers watched as it bobbed its way to the crest of the Falls and then disappeared. 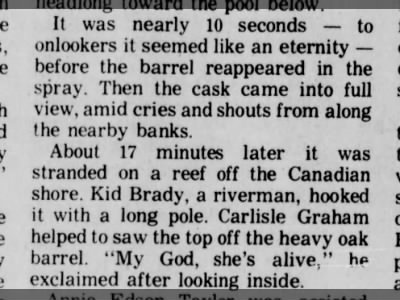 Unfortunately for Taylor, the fame she received after her death-defying stunt did not bring the wealth she hoped for with it. Despite a few tours, posing for photos at booths, an attempt at a book, and a brief mention of a second attempt, she died in 1921 in much the same monetary situation that she’d been in before the stunt. Still, she will always hold the honor of being the first person to tumble down Niagara Falls. 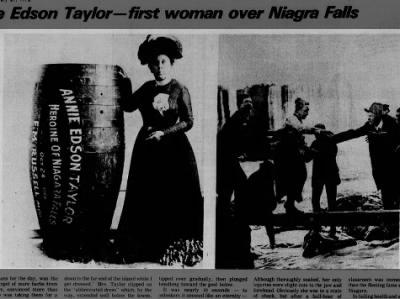 Find more on Annie Edson Taylor in the pages of Newspapers.com, or search or browse for other topics of interest to you.